I thought I’d spend a blog post just talking about the various paths of my research and try and tie it all together. A lot of my experiments do dot around these various arms of investigation and so one experimental post doesn’t necessarily tie in directly with the previous one or the next one and I thought it might be a good idea to explain why and summarise where I’m up to with each strand.

My main focus of research is to investigate the cause of the disease fibrodysplasia ossificans progressiva (FOP). We know that it’s caused by a mutation in ALK2 which leads to excessive bone formation. This also nicely dovetails with research done into DIPG where 25% of cases share a mutation with FOP in ALK2.

My research can be broken down in to three main strands: 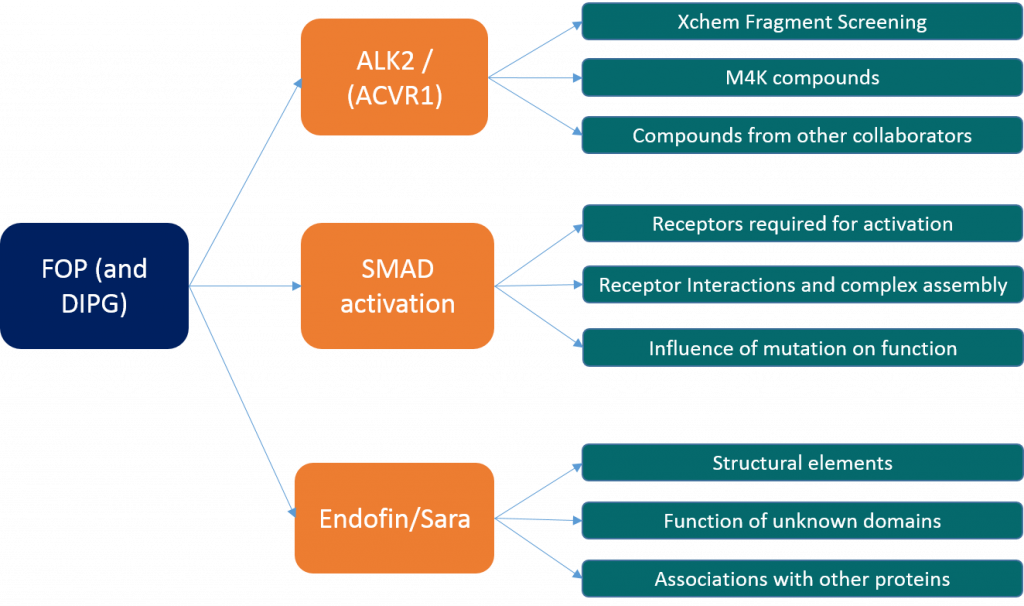 My work moves between these three strands depending on how much and which proteins I’ve got available to me – do I have any in the freezer already purified or do I need to make fresh? And that’s if I have the pellets in the freezer of the expressed protein in the first place. It also varies depending on whether we have new compounds we’re interested in testing immediately from either M4K or other collaborators, or whether I’ve got data I need to analyse from previous successful crystallisation attempts. Sometimes I’ll be looking at my own structural data and sometimes I’ll be looking at someone else’s structure which we call ‘proofreading’ to double check it for errors and make sure nothing has been missed. Sometimes we’ll have time at Diamond and so everything else has to be put on hold in order to make use of that visit (such as XChem trips) and sometimes there’s a lot of data analysis to do on other experiments – writing it up and understanding what the data is telling us is just as important for progress as the experiments themselves.

Having the three strands means I can move from one to another as each strand has its own peaks and lulls in activity at different times. I’m afraid it does make for a slightly more disjointed blog journey but I hope you’ll bear with me through it all as I try and make sense of the problems I’m investigating.

I’ll try and post again sooner rather than later on what I’ve been doing in January as it has been really rather bitty and frustrating in terms of things actually working but hopefully February will bring with it some more productive experiments.