Aside from determining the optimal numbers of DIPG cells to be seeded for viability assay, it is also important to validate that measurements using CellTiter Glo are in agreement with other methods of determining cell viability.

I chose to compare the EC50 values of M4K2009 on HSJD-DIPG-007 when measured using different methods. A simplified comparison of the different measurement methods is summarised in the following table. 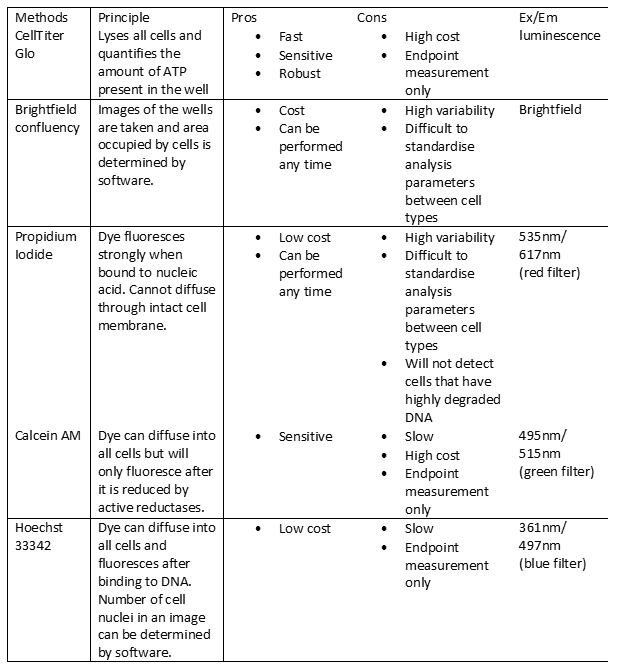 Comparison of the different methods 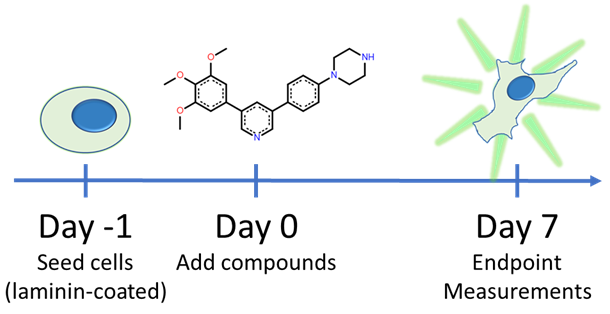 The timeline of this experiment 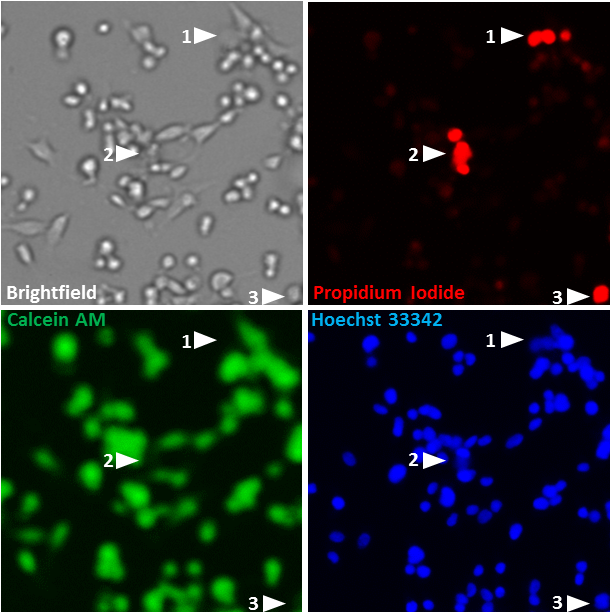 Demonstration of how different stains serve as the indicator of various cell aspects. Dead cells (marked as 1, 2 and 3) that are stained by Propidium Iodide (Red) are not stained by Calcein AM (Green). They are still stained by Hoechst 33342 (Blue), albeit at slight lower intensity due to DNA degradation. Depending on the form (apoptosis vs necrosis) and extend of cell death, they might no longer be visible in brightfield (based on Differential Interference Contrast).

EC50 of M4K2009 determined based on the amount of ATP in each well (left) and total area occupied by cells (right). Brightfield images were acquired every 24 hours.

EC50 of M4K2009 determined based on the intensity of dead cell stain (left) and area occupied by the stain (right). Propidium iodide signal was imaged every 24 hours.

EC50 of M4K2009 determined based on the metabolic activity of the cells (reduction of Calcein AM stain). Both signal intensity (left) and area covered by the signal (right) were examined.

EC50 of M4K2009 determined based on the total number of cells (staining of all cell nuclei). Both signal intensity (left) and area covered by the signal (right) were examined.

1) 7 days of compound treatment gave the best assay window for EC50 estimated based on the confluency of the cells.

2) CellTiter Glo is superior over other methods of quantification in term of robustness and number of steps involved.

3) Propidium iodide staining of dead cells is not suitable for EC50 estimation because most dead cells likely became too degraded to be stained after 7 days of compound treatment.

4) EC50 estimation based on Calcein AM staining of metabolically active cells was robust but not as sensitive as CellTiter Glo or cell confluency.

5) EC50 estimation based on the amount of nuclei stained by Hoechst 33342 is relatively variable.

In a nut shell:

In future experiments, the EC50 of M4K compounds on the viability of DIPG patient-derived cell lines will be estimated based on CellTiter Glo signal and cell confluency.

For experimental details, please refer to my Zenodo page.