Back again. Two posts in one month! I know its crazy, but I’m just excited to tell you about the progress that is being made on this project. First things first, purifications. This week I have four more to tell you about.

The first is GFP, and unlike all of my other posts, this is not because it interacts with HTT. At the moment we are trying to over express FLAG-Tagged HTT in a neuronal cell line. Growing tagged HTT is usually done in HEK293 cells although this isn’t a great cell line for physiological studies of HTT due to its improper localization. Neurons are quite a bit more sensitive, so extra care has to be taken to properly over-express this protein. Using conventional methods of over expression don’t really work due to the physical characteristics of tagged HTT, mainly its size. To get the protein into the cell we are considering following the example of Lambert, H. et. al.( https://doi.org/10.1139/o90-105). Described in this paper, is a method of electroporating cells to insert protein into the cell instead of DNA to express said protein. The GFP will be used as an optimization tool to ensure our electroporation method can successfully insert a protein into a neuronal cell. 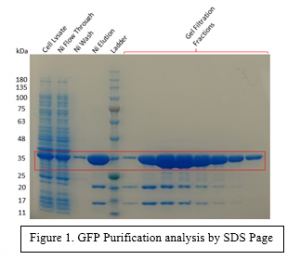 The other proteins that were purified pertained to my main project. They were P97, PIAS1, GIT1 and SP1. P97 was purified successfully resulting in a final yield of approximately 3 mg. PIAS1 was unable to be successfully purified. Previously a shorter construct of PIAS1 was expressed in E. coli BL21 codon plus RIL but now we attempted an SF9 construct of full length PIAS1, although it seemed to have very poor expression in this system. GIT1 and SP1 were also unsuccessfully purified. As always, more detailed methods of purification can be found on Zenodo, any of the hyperlinks of the proteins will bring you to the respective Zenodo post.