A lot has happened in the past few months and it is with mixed feelings that I am finishing up my postdoc here at SGC! I feel very privileged to have been part of the great science going on at SGC and a pioneer of the Open Notebook initiative here, contributing to open science. Nonetheless, the science has to go on! Hopefully, my posts in this Open Notebook have provided new perspectives to people working on similar projects and trying to learn more about Huntington’s Disease and huntingtin (HTT), inspired people to strive on for science despite the negative and/or inconclusive data, or at least given some insight to how life on the bench is like in general.

Previously, I showed that the use of PRMT5 inhibitors from the SGC probe library, namely GSK591 and LLY283, were able to decrease levels of HTT in HeLa cells. SGC2096, the inactive control to GSK591, was not able to decrease HTT protein levels. This, together with the different mechanisms of action of GSK591 and LLY283 in inhibiting PRMT5, demonstrates that it is indeed through the specific inhibition of PRMT5 that HTT protein levels were decreased. So far, I have not come across any drug that is able to regulate the levels of HTT protein. As such, the inhibition of PRMT5 to reduce the expression of HTT at the protein level presents a potential and exciting therapeutic avenue for the treatment of Huntington’s disease.

The findings that PRMT5 inhibition itself can affect the expression of HTT at the protein level suggests that there might be some interaction and possible feedback loop in play between PRMT5 and HTT. We thus further investigated how PRMT5 inhibition may contribute to the decrease in HTT protein levels to elucidate the mechanisms involved in this process. As PRMT5 is the main enzyme known to mediate symmetric demethylation of arginine (SDMA), we thus checked how the levels of SDMA are affected by PRMT5 inhibition and HTT knockdown. 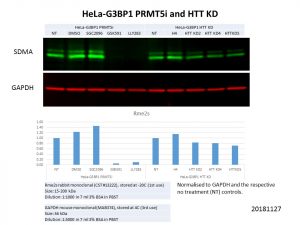 The two-way crosstalk demonstrated by PRMT5 activity levels affecting the expression of HTT and the presence (or absence, since we used a knockdown model) of HTT likewise decreasing SDMA levels suggests that the relationship between PRMT5 and HTT is complicated and reciprocal, with one regulating the other possibly through post-translational modifications such as SDMA and other epigenetic mechanisms, and warrants further investigation as to how the activity and levels of PRMT5 and HTT are related. Some important future experiments would be to test if PRMT inhibition is also able to decrease the protein levels of mutant HTT similarly to how it affects wild-type HTT, and if so, this will be an exciting opportunity to follow up on in the search of a potential therapy for Huntington’s disease.