Stem cells are a set of cells that, unlike most cells in the body, can divide as many times as they want, and can turn into any cell in the body. The mutations in cancer often make the cells behave more like stem cells, because in order to grow into a large tumour they may need to divide hundreds or thousands of cells, and it can allow a single cell to escape to another part of the body and grow into a second tumour (this is called metastasis). Knowing whether all of the cells in a tumour, or even a small proportion of them behave like this, and whether they’re killed by new therapies can be important information – if just one of these cells survives theoretically they can regrow into an entire new tumour.

And this ability to regenerate an tumour is just how we test how many of these cells are present: I developed an assay where I dilute the cells until I can seed just a handful into each well, and then I count how many new colonies (like tiny tumours) have grown.

I then used a statistical rule (called the Poisson distribution) and a programming package (called R) to work out at what dilution there is just one stem-like cell present i.e. if only one stem cell is present when I seeded 5 cells then 20% are stem-like. 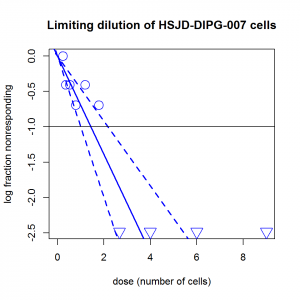 The program mathematically transforms the data and then finds a straight line that fits it. Where this line crosses -1 indicates where 1 stem-like cell is present.

Although I need to repeat it to make sure the result is reliable, it seems that almost all of the cells in this line are stem-like! If you’d like to read about the technical details of this experiment you can do so here.