I’ve been lucky enough to have a student (Mira) in the lab working with me for the past few weeks and so I’d like to write about the work that we’ve been doing together.

We spent some time cleaning up an old sample of ALK2 that Ros had left over in the freezer to set up in crystal plates with some compounds from M4K Pharma that they were relatively keen to see the structures of.

We used a specialised coarse screen that Ros had designed containing only conditions where we had previously seen crystals in the wider coarse screens. This means that we can narrow down the field where we’re expecting to find crystals and test fewer conditions to find the one we need – this means setting up fewer plates and thus needing less protein per compound tested, so is overall more efficient.

We found some interesting crystals, one of which was mountable as is (from M4K2192) and several across all the compounds, which showed small crystals that would be worth following up in more specific conditions. 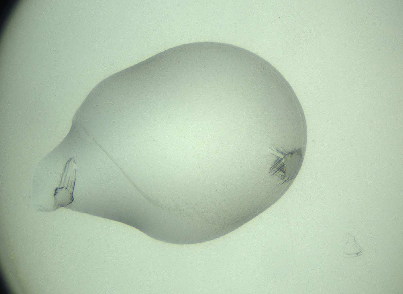 Crystals of ALK2/ACVR1A with compound M4K2192

So Mira designed some follow up screens based on the conditions that showed small crystals and we set up some more plates with those conditions in the hope of turning those small crystals into larger, better crystals. We had enough protein to set up followup plates for compounds M4K2163 and M4K2143 at 9.5mg/ml. From these plates we mounted 5 crystals across the board and combined with those above ended up with crystals of unknown quality across three compounds. These have been confirmed as containing protein by imaging the drops by UV light (UV light interacts with protein to make crystals only visible under UV light if they contain protein rather than just being salt) and are now waiting to be sent to the synchrotron to see if they actually diffract or not.  You can read more about the technical details here on Zenodo.

Yesterday (23rd) also marked FOP awareness day and so, shamefully a day late, I’d like to add my picture to the many others out there celebrating #FunFeet4FOP! Here are my toes. 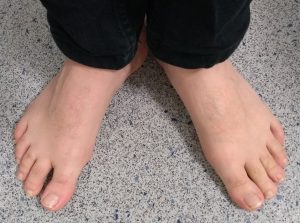