I am interested in understanding the role of UBE3A as an E3 ligase in the context of neurological diseases. UBE3A shows brain-specific imprinting and the loss of function of maternally inherited UBE3A has been linked to Angelman syndrome (PMID8988171). In addition, the autism-linked UBE3A-T485A mutation disrupts phosphorylation control of UBE3A and enhances UBE3A ubiquitin ligase activity (PMID28559284). This suggest that dysregulation of UBE3A, both downregulation and upregulation, can affect neurological function.

To better understand the cellular function of UBE3A, we can use chemical probes to inhibit it. To identify compounds that affect UBE3A, we can develop reporter assays that detection activation of pathways involving our protein of interest. UBE3A can stimulate Wnt pathway activation and protect β-catenin from proteasomal degradation with these activities requiring the ubiquitin ligase activity of UBE3A (PMID27902311) (Fig 1). Here, I describe a UBE3A Wnt-signalling reporter cell assay developed in collaboration with Dalia Barsyte-Lovejoy. The methods described in this post can be found on Zenodo. 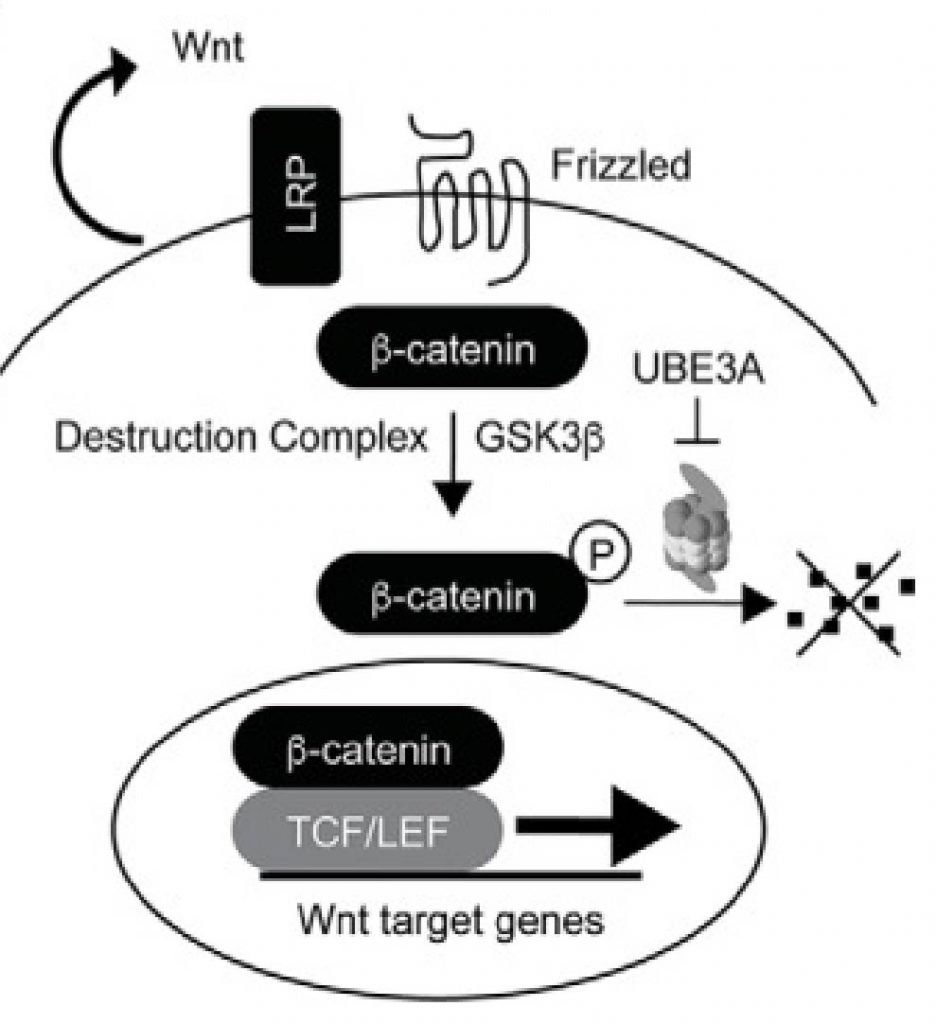 To assess the transcriptional output of Wnt pathway we utilized the TCF response element 8xTOP-Flash-FLuc (Firefly luciferase) reporter that is co-transfected into HEK293 cells together with increasing amounts of UBE3A and Renilla luciferase (Rluc) expressing plasmid that is used for transfection efficiency normalization purposes (Fig 2).

To determine if UBE3A specifically affects the Wnt reporter and is not affecting the control Rluc or the mutant TCF response element reporter Fluc, we assessed the Rluc and Fluc separately and as a normalized ratio (Fig 3). UBE3A drastically upregulated the 8xTOP reporter signal, slightly upregulated Rluc driven by TK promoter and had no effect on mutant FOP reporter. We also use a GSK3 inhibitor to ensure that the 8XTOP-Flash-FLuc reporter responds to Wnt activation. Normally, GSK3 phosphorylates β-catenin triggering its degradation.  Inhibition of GSK3 will stabilize β-catenin, translating to increased Wnt signalling. The 8xTOP Flash reporter is activated by GSK3 inhibition and resulting Wnt activation, but the mutant FOP Flash reporter is not.

Apart from testing the specificity of the assay, we also want to show that the system is it is responsive to varying levels of Wnt activation. We find that increasing amounts of three different isoforms of UBE3A resulted in Wnt reporter activation in a dose-response manner (Fig 4). UBE3A isoform III gave the highest relative activity Fluc/Rluc (i.e. lowest signal:background ratio) which makes it the most suitable for chemical probe screening. We will use this isoform moving forward.

To further validate the assay, we test whether the Wnt activation is dependent on the catalytic activity of UBE3A. Using site-directed mutagenesis, I made the UBE3A-C833A catalytically inactive mutant (PMID9497376) where the alanine substitution of the active site cysteine obliterates UBE3A’s ability of forming a thiolester bond with ubiquitin. The wildtype UBE3A protein showed Wnt reporter activation, while the catalytic cysteine C833 mutant UBE3A did not (Fig 5). 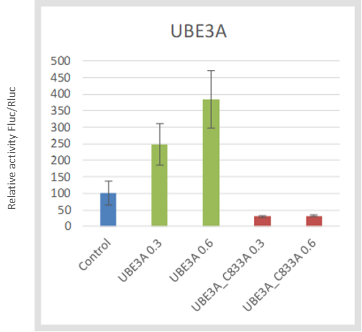 Now that I have a Wnt activation cell assay that is specific, dose-responsive and depends on the catalytic activity of UBE3A, I can screen for compounds that may inhibit UBE3A catalytic activity and use it to better understand the function of UBE3A in neurological disorders.