Things have been really busy in the lab the last few weeks. I’ve done a couple of purifications of ACVR1 (ALK2), which I’ll post in Zenodo (getting loads of protein now), but probably won’t write up the details of every purification every single time anymore, as it’s the same process every time for this construct. Please feel free to access earlier Zenodo posts for the protocol, or contact me and I’ll send you the links. I’ve also set up at least 50 crystal plates over the past month, most using the composite screen I made a while back, as well as follow up screens for hits in those conditions.

I haven’t been lucky with other compounds again like I was with the big, beautiful M4K2117 crystals, but, after initial apparent abject failure to reproduce these, I now appear to have grown a plate of simply gorgeous beauties (about 40 wells with lovely crystals, which in theory should diffract around 1.5 Å or better) (see pics below, verified as protein with UV imaging). I’ve done this for the fragment screening side of the project, where we’re using x-ray crystallography to screen compound fragments in search of an allosteric binding site on ACVR1, as described in earlier posts. The crystal system I’ve been using is with LDN-193189 co-crystallised with ACVR1. The crystals are big and beautiful, but suffer from some issues: they give variable space groups, tricky for the pandda software to deal with, they have thick skins, which makes soaking somewhat variable and necessarily increases the soak time, as well as making mounting tricky. In many cases while mounting, I noticed the skin was formed almost as an envelope around the top and bottom of the drop, thus when you try to pull back the skin, it pulls the crystal with it and then wraps it up tightly in a big lump of sticky skin. I’m not that great at the micro-surgery needed to separate the mess out. Additionally, many of these crystals melt or become friable when soaked too long (more than ~2 hours).

The M4K2117 ACVR1 co-crystals however are in nice clear drops, although the conditions are very salty (0.1 M citrate pH 5.0 – 6.0, 1.4M ammonium sulphate, 0.2M sodium/potassium tartrate). This could be an issue for fragment binding – acidic conditions with lots of charged species around. Thus, I intend to test what happens if I soak them in different formulations of lower salt with and without some PEG3350. Also, I need to figure out how to grow them reproducibly, as only those 40 wells from one plate out of 6 set up actually grew. It’s unclear why 2 other plates the same conditions and 3 other plates with essentially the same condition didn’t grow. Or perhaps I just need to wait a little longer (they take about a month to grow).  Many of the wells without crystals have a lot of phase separation, as shown in the pic below as well. 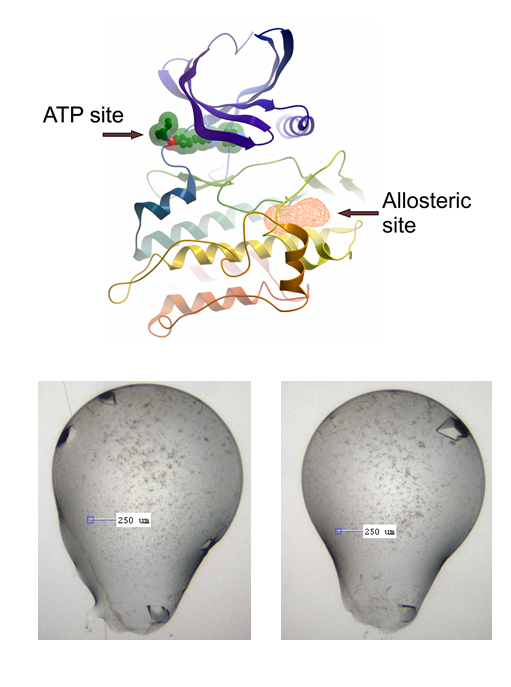 The allosteric site in question, and the current LDN-193189 co-crystals we are using 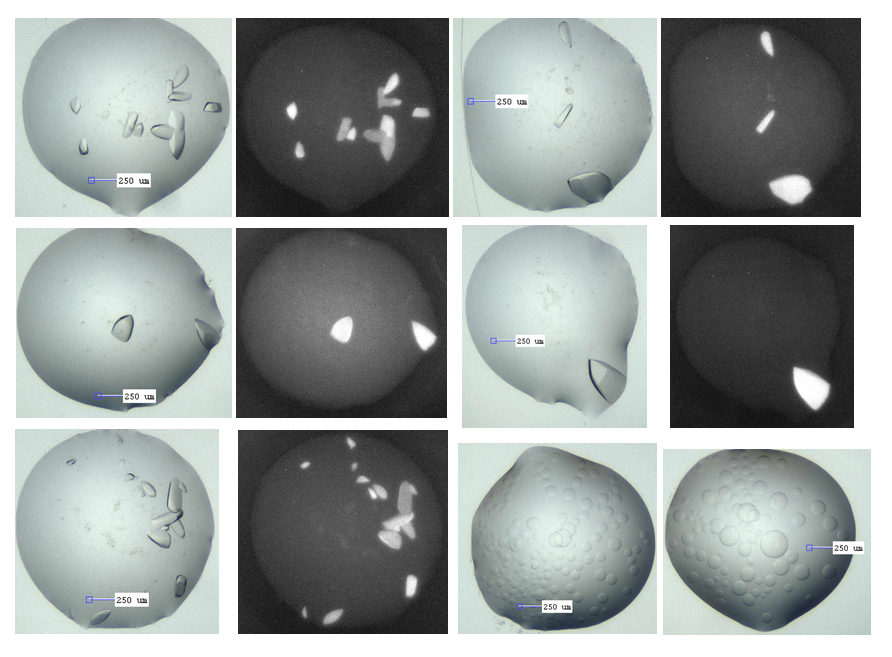 ACVR1-M4K2117 co-crystals, with corresponding UV images showing these are indeed protein. The lower right pics show the phase separation that is in the majority of wells.

2 Replies to “Update on crystal hits, XChem and more purification”