The inter-domain conformational mobility of UGGT, the eukaryotic secretion glycoprotein folding checkpoint, is likely key to its ability of recognising and re-glucosylating a vast number of different misfolded glycoproteins, bearing N-linked glycan(s) at various different distances from the site(s) of misfold.

Ongoing Molecular Dynamics simulations by Juan Blanco, Carlos Modenutti, and Marcelo Martí in Buenos Aires have highlighted a motion called clamping, which brings the TRXL1 and the TRXL3 domains of UGGT close together. To test the importance of this clamping motion we have engineered a double Cys mutant of Chaetomium thermophilum UGGT (aka CtUGGT) which locks the clamping motions shut: S180C:T742C. This mutant is called CtUGGT-N for short.

The cloning, protein expression and purification were successful. Mass spectrometry confirmed the existence of the desired disulphide bond. We have managed to crystallise the CtUGGT-N protein in two distinct crystal forms and we have determined the structures.

In the trigonal form, the orientation of TRXL2 with respect to the rest of the protein is the most opened ever observed so far (a rotation of 60 degrees away from the TRXL2 in PDB ID 5NV4). The orthorhombic form proves that the clamped shut structure (CtUGGT-N P212121) is compatible with the bent shut structure (CtUGGT 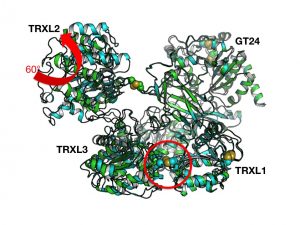 -H, P212121, PDB ID 5NV4) i.e. both clamping and bending movements can close at the same time. A quadruple CtUGGT mutant, containing both D611C:G1050C and S180C:T742C, should be feasible and its human UGGT1 equivalent could provide the best rigidification of the human structure conceivable so far – in order to aid crystallisation and obtain the so far elusive human protein crystal structure.

One Reply to “Crystal structures of the CtUGGT double mutant S180C:T742C”