Medulloblastoma is a cancer that arises from neural progenitor cells in the brain.  This cancer most commonly occurs in young children ages 1-4, and is the most common type of childhood brain cancer.  Although many cases of medulloblastoma show good prognosis, there are some sub-types of this cancer that recur with low survival rates, and treatment itself involves extensive irradiation to the entire brain and spinal cord, resulting in severe side effects and reduced quality of life, including cognitive defects, endocrine disease, and development of secondary cancers later in life.

Medulloblastoma falls under four molecular subgroups, each arising from a different progenitor cell: WNT, SHH, Group 3, and Group 4.  The WNT subgroup relies on the WNT growth pathway, and is the least common of the four types. WNT tumors have an excellent prognosis, rarely spread beyond the tumor bed, and are not aggressive.  The SHH subgroup relies on the SHH growth pathway, and is the second most common of the four groups.  SHH tumors have intermediate prognosis, but do not commonly spread.  Targeted therapy options already exist for SHH tumors, which target SHH signaling.  Group 3 and Group 4 tumors are the final two groups of medulloblastoma, and although these two groups show many chromosome aberrations, researchers have failed to find driver mutations for either of them.  Group 3 tumors often have amplifications in MYC, and have a dismal prognosis, while Group 4 is the most common type of medulloblastoma and has an intermediate prognosis.  Both Group 3 and 4 tumors frequently spread to the spine and other parts of the brain, with metastasis at presentation being the single largest risk factor for long term survival.  Since driver mutations are not known, developing targeted therapies for either of these two groups is a challenge. 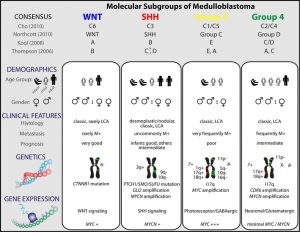 Figure 1 – Summary of the four molecular subgroups of medulloblastoma

Group 3 and 4 medulloblastomas share frequent aberrations in epigenetic regulators.  Epigenetics describes multiple processes that determine how different cells in organisms express their genome without altering the genome sequence itself.  The Structural Genomics Consortium has an ever-expanding group of probes that target epigenetic regulators, and my project is to make use of this library to screen Group 3 medulloblastoma cell lines for targeted therapy options.  Multiple continuous medulloblastoma cell lines exist for the Group 3 subgroup, including D425, D458, D283, and MED8A.  These will be screened using the epigenetic probe library, and I will be particularly interested in probes that negatively affect cell growth in multiple lines.