Alzheimer’s disease (AD) is a progressive neurodegenerative disorder, characterized by two pathological hallmarks – extracellular amyloid plaques that are made up of amyloid-peptide and intracellular neurofibrillary tangles that are comprised of hyperphosphorylated tau. AD neuropathology, however, begins decades before symptomatic cognitive decline. To understand early changes associated with AD pathogenesis and to identify new targets for early diagnosis and therapeutics, our group has initiated a thorough examination of the human AD brain proteome. As published previously (1) and more recently (2), weighted co-expression network analysis of the AD brain proteome revealed a module that was strongly correlated with higher neuropathological burden and worse cognitive outcomes, as well as highly enriched in microglial and astrocytic proteins and contained proteins involved in response to inflammation. One of the key proteins within this module, CD44 (cluster of differentiation 44), has been identified as a proinflammatory protein. The CD44 gene has also been specifically linked to AD in a genome-wide association study, where CD44 was identified as one of several genes that are associated with modification of the age of onset of AD in PSEN1 mutation carriers (3). In this report we have investigated the association of CD44 and its isoforms to AD pathology.

CD44 is an inflammation-related gene encoding a widely distributed family of alternatively spliced cell surface glycoproteins (4). CD44 functions as a receptor for hyaluronic acid (HA) and osteopontin, and has been implicated together with its ligand HA in several inflammatory diseases, in inflammation-linked neuronal injuries and in cancer (4). Numerous CD44 isoforms are generated due to alternative RNA splicing which involves at least 10 exons (5). In addition, variations in glycosylation contribute to structural and functional diversity of CD44. Standard CD44 (CD44s) lacks all 10 variable exons while variant CD44 isoforms may contain one or more alternatively spliced exons in between standard exons (5). The distribution of the CD44 isoforms in the normal (5) and AD brain have been reported previously (4). However, the specificity of the isoform-specific antibodies was not verified in these previous studies. In this investigation we have first confirmed the specificity of the CD44 isoform-specific antibodies and then used the validated antibodies to examine the distribution of CD44 isoforms in normal and AD brains. 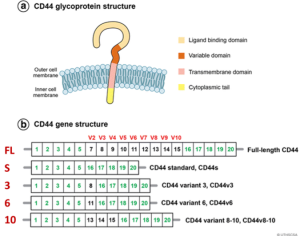 Figure 1. Structure of the CD44 variants from Chen et al. (Reference 6). (A) Illustration of the domain structure of CD44 glycoprotein. (B) Schematic of CD44 variants. Exons shown in green are always expressed as a standard form of CD44 (CD44s), and up to nine exon variants can be inserted by alternative splicing. Full-length CD44, CD44s, CD44v3, CD44v6, and CD44v8-10 are shown. Figure from Chen et al. (6).

To confirm the specificity of the commercial CD44 antibodies, we obtained plasmid constructs of the five CD44 isoforms (Figure 1) fused with a C terminal V5 tag. These plasmids were transfected individually into HEK293T cells and the cells overexpressing the corresponding CD44 isoform were subjected to immunoblotting detection using the CD44-specific antibodies obtained from several commercial sources. The immunoblotting results are shown in Figure 2 and the antibody information can be found in Table 1. Pan-CD44 antibodies are generated from protein sequences shared by all CD44 isoforms. They recognize all five isoforms in the immunoblots (Figure 2A). Antibody sc-18849 is described as CD44s specific, however, the exons for the CD44s isoform are shared with all CD44 isoforms. Therefore, sc-18849 should not be specific to CD44s and is included as a pan-CD44 antibody. The CD44 v3 specific antibody is generated from an epitope encoded by exon 9 (Figure 1), which identifies the full length CD44 and CD44 v3, but not others (Figure 2B). Similarly, the epitope for CD44 v6 antibody is encoded from exon 11 (Figure 1), which identifies the full length CD44 and CD44 v6, but not others (Figure 2C). The CD44 v6 antibody shows nonspecific signal at a 1:1000 dilution, but the non-specificity is significantly reduced when using a 1:3000 dilution. All the three CD44 v10 antibodies are nonspecific (Figure 1D). While ab6124 can identify all of the CD44 isoforms, the 217685 and AB2082 only show non-specific background signal. These results are summarized in Table 1. 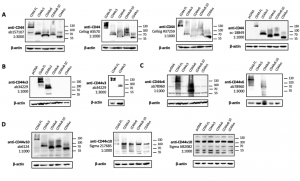 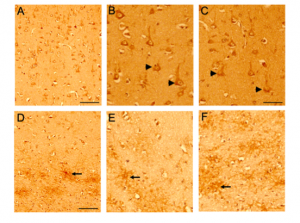 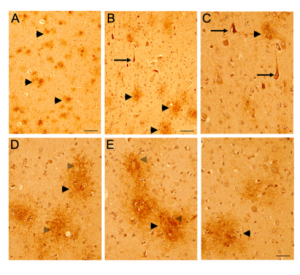 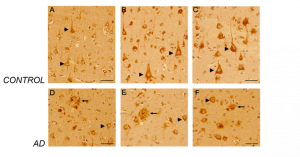 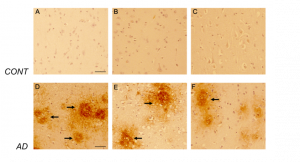 Figure 7. CD44s-isoform specific expression in control and AD brains. Representative images demonstrating immunoreactivity (ir) for CD44s isoform, using the CD44s-specific sc18849 antibody. Note that the CD44s-ir could not be detected in the control brain sections (Figure 7 A-C) using this antibody. In AD brain sections (Figure 7 D-F), CD44s-ir could be detected in diffused-plaque-like structures (arrow) throughout the frontal cortex. The ir was not associated with any brain specific cell types. Please note that sc18849 antibody is not specific for the standard CD44 isoform (CD44s, Figure 2). Scale bars – 100µm.

In brief, we confirmed the specificity of commercially available CD44 antibodies by immunoblotting transfected cell samples overexpressing specific CD44 variants. We then applied the validated antibodies to examine the distribution of CD44 variant expression levels in normal and AD brain tissues using immunohistochemistry. The experimental conditions and results of this study are summarized in Table 1. 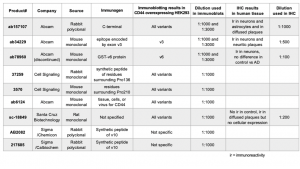 Sequences of CD44 variants with a C terminal V5 tag were cloned into the FUW backbone between XbaI and EcoRI restriction sites. The sequences of the CD44 variants used in this study are shown here.

HEK293T cells (ATCC® CRL-3216™) cultured in DMEM with 10% FBS and 100 U/mL penicillin and streptomycin were plated at 5 x 105 cells per well in 6-well plates. On the next day when the cell confluency reached 70%, CD44 variant plasmid or pcDNA control plasmid was transfected at 2 µg per well with transfection reagent polyethylenimine at 1:3 ratio (6 µL of reagent per well). Cells were harvested 45 hours post-transfection, then lysed and boiled with 200 µL of 2X Laemmli Sample Buffer (BIORAD Cat#1610737). The samples were used for SDS-PAGE and transferred to nitrocellulose membranes. After blocking with 5% milk/TBST buffer, membranes were incubated with primary antibodies at 1:1000 or 1:3000 dilution at 4 oC overnight, then incubated with corresponding HRP-conjugated secondary antibodies at 1:5000 or 1:10,000 dilution for 1 hr at room temperature. Membranes were exposed with SuperSignal West Pico PLUS chemiluminescence substrate (Thermo Scientific, REF 34580) and images were taken by BIORAD ChemiDoc Touched Imaging System.