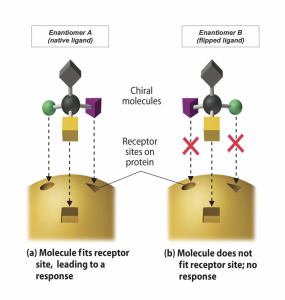 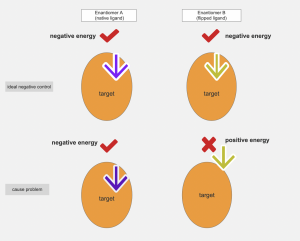 Given a crystal structure of one enantiomer bound to a protein, we can calculate the binding energy of the native ligand (enantiomer A) for protein X and the energy of the “flipped” ligand (enantiomer B) for the same protein X. A positive energy of the flipped ligand indicates that there are steric clashes and that the ligand is inactive against this protein. Applying this approach to the hundreds of structures of chiral ligands in the Protein Databank (PDB) can indicate the likelihood that the mirror enantiomer of chemical probe does not bind to off targets of the chemical probe. If you would like to know more detail descriptions of methods and script, please refer to my Zendo report.

After flipping the chiral center of these compounds, we can calculate the energy between each ligand and its binding pocket. A positive flipped energy indicates that there are strong steric clashes of the flipped ligand with the binding pocket which abrogates binding to the target.  There are 20% compounds with negative native energy and positive flipped energy, indicating that while these ligands are active against a target protein, its enantiomer are inactive against the same target.

Together, these data indicate that about 80% of off-targets inhibited by a chemical probe containing a chiral center will also be inhibited by a negative control consisting of the mirror enantiomer of the chemical probe. The common practice of using as a negative control a mirror enantiomer when available seems therefore justified, though not risk-free.

Based on computational analysis of over 1000 chiral drug-like ligands bound to proteins in the PDB, we find that mirror enantiomers will retain binding to the same target protein in 80% of cases. The difference in binding potency between enantiomers should be evaluated to complete this analysis.