I was previously using an HTT overexpression model to look at any changes in proteins related to HTT or its function. Unfortunately, none of the related proteins I looked at showed any significant change in protein levels with HTT overexpression. There are several reasons for this: the HTT overexpression might not be strong enough (especially for the larger constructs of D4 and D6, which are harder to express) or the level of HTT protein in the cells is already saturated, hence an overexpression does not further affect these proteins of interest. I therefore decided to use a knockdown model instead, which might provide more insight into the functions and effects of HTT. 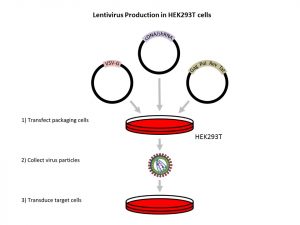 Upon transduction of the target cells, the lentivirus delivers the plasmid encoding the shRNA to the nucleus. The plasmid produces the shRNA, which is processed by the target cell, leading to the production of a sequence complementary to that of the mRNA of the gene of interest, HTT. The binding of this complementary sequence to the mRNA of the gene of interest causes the formation of the RNA-induced silencing complex (RISC). The RISC, consisting of both the complementary sequence from the shRNA and the mRNA of the gene of interest, is then degraded, preventing the expression of the target protein, which is HTT in this case, leading to the knockdown of HTT. As the plasmid in the target cell continuously produces the shRNA, the mRNA is continuously degraded and the cells are stably knocked down for HTT. 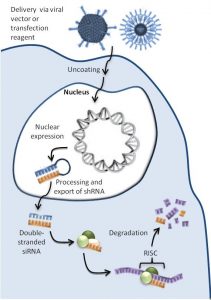 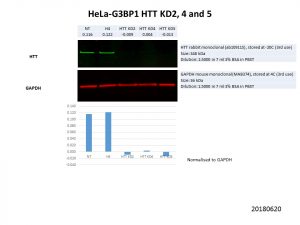 As you can see, the levels of HTT are much lower in the HTT knockdown cells compared to the no treatment and H4 (luciferase) controls. I will next use these cell lines to identify any changes in expression of HTT-related proteins.