Here is the representative graph form one of the experiments. 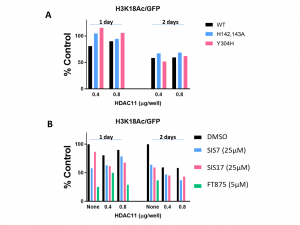 Hela cells were co-transfected with GFP-tagged histone H3 and or with different amounts of Flag-tagged HDAC11 (Wt or Y304H and H142,143A catalytic mutant) or empty vector and treated with inhibitors for 1 or 2 days. https://zenodo.org/record/3525243#.XbxdiDNKg2w