Now that our workhorse ACVR1 construct is expressing again, I’m getting loads of protein – 26 mg on the last 3 L scale up! Because of this, I’ve been really busy in the lab trying to get things back up to speed again. While waiting for the ACVR1 to work, I purified some TGFBR1 (ALK5) for co-crystallisation with some of the less ALK2-specific compounds M4K has been providing us with. The protocol notes for that are here, but unfortunately, neither the short nor long constructs of TGFBR1 has provided us with any usable crystals so far, despite setting up many, many plates. If possible, I will farm some of the plates for seeds, but the reality is there was not much crystalline material in my TGFBR1 plates.

I also spent some time (and gained a few more grey hairs) designing and making a big composite screen of all our other coarse screens (5 in total). We are aware that screening a lot of compounds at two different temperatures in 5 screens, and then following up on hits from those screens is time and protein-intensive. We decided to make things a little more streamlined and efficient by looking at the conditions that ACVR1 typically crystallises in. Analysis of the 13 structures of ACVR1 in the PDB showed that most of them grew in conditions containing phosphate, citrate or sulphate. Thus, I pulled out all the phosphate, citrate and sulphate conditions in JCSG7, LFS6, HIN3, HCS3 and BCS6 and combined them all into one big 96-well coarse screen. The components of the screen are all in the Zenodo post here.

Since I had a lot of fresh new ACVR1 – the purification protocol is here – I set up 10 compounds at two different temperatures with this new screen, and got loads of hits (images below). Unfortunately, after UV imaging the plates, I discovered that all the big, beautiful, fabulous looking crystals I had picked in the ammonium phosphate/acetate condition, were salt. Crushing disappointment! So today I’ve made 3 more fine screens based on the ugly, needly, micro, spherulite-like hits I had in other conditions, that are in fact protein. I’ll document these screens tomorrow. With a huge dose of luck, I will have some prettier crystals by tomorrow morning, in time to mount them and send them to the synchrotron for our trip Friday evening. In the meantime, I’ll try to mount some of the less ugly ones from the coarse screen. 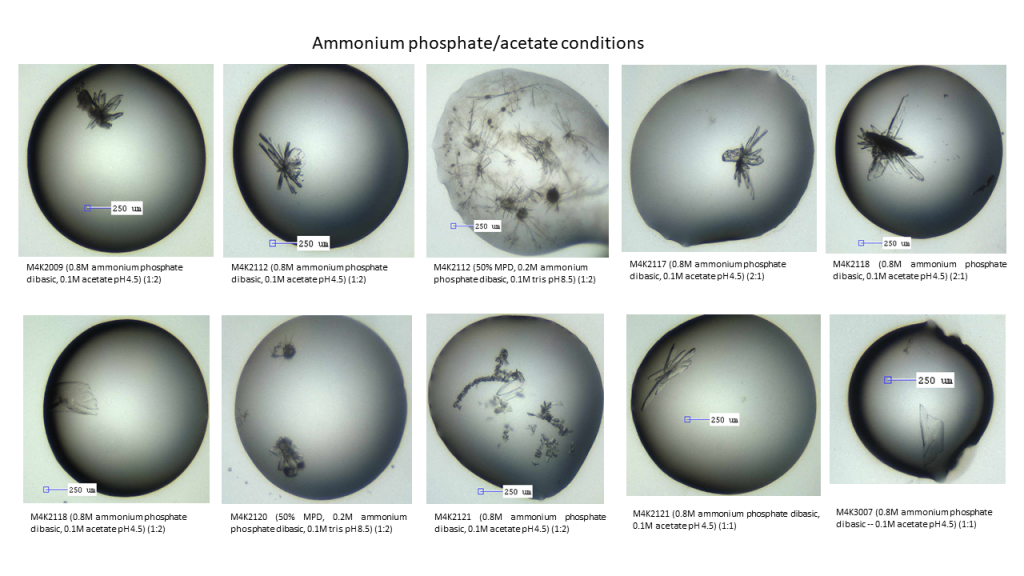 Crystals that looked like hits, but were actually salt

Crystals that looked like salt, and were actually salt

2 Replies to “Lots of protein now! A massive composite screen and a few crystal hits”