Hello again! It has been a while since my last post but that is not for lack of data. Over the past month I have been purifying like crazy, adding more proteins to out bank of possible interaction partners. As we are now in the final month of the project, I want to take this post and summarize all of the work that has been done so far.

This project set out with a goal of isolating putative interaction partners for use in interaction testing assays with HTT. As such, I have spent the summer harvesting and purifying proteins using different chromatography methods; including Nickel affinity and size exclusion chromatography. Below, I have an SDS analysis of all protein samples collected thus far. 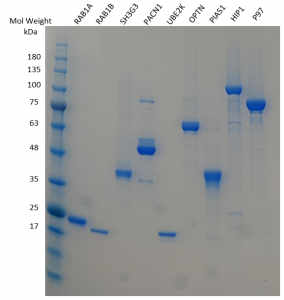 To be more specific about my recent purifications; SQSTM1, GAPDH and HIP1 were all recently grown and attempted to be purified. Sadly, the SQSTM1 and GAPDH resulted in no yield. SQSTM1 was expressed properly although the purification was not stringent enough, leading to an unusable product. GAPDH on the other hand seemed to have a problem with expression, unknowingly, I accidentally purified a contaminant it was discarded after Mass Spectrometry data showed it was a contaminant. HIP1 was a different story, purification by Nickel affinity and size exclusion chromatography proved successful, yielding almost 2 mg of protein. The detailed methods used of these purifications, as always, can be found on Zenodo. Each hyperlink on the protein name will take you to their respective Zenodo post.

One Reply to “More Protein Purification”