In 1998, I did my Leaving. For those not from Ireland, you think ah OK, he left home and went away. But if you are from Ireland, you know exactly what I mean. It doesn’t mean I left home, it means I sat my leaving certificate examinations, exams that mark the end of secondary school (or high school if you live in North America). At the end, your final grades determine what course and university you are accepted to, so no pressure. I was reminded of this perusing the Irish news yesterday and hearing about the 60,000 students who received their results. These grades determine the next frontier in their lives, determining what they study and where they might go to college. It has been 21 years since I received my results (I know, I look so young), and from my final marks, I got to study “Science” at University College Dublin or UCD. Going to university was the next frontier for me as it was here I grew out of my shell as the shy, quiet kid. It was also where I learned to love science and made the decision to actively pursue science as a career, which two decades later seems like it was kinda sort of a good idea.

So why the flashback to the 1990s? Well the main reason relates to the two new SOPs I put up today, which outline how we make motor neurons from stem cells (one is our print version, and the other is our interactive clickable pdf). When we started the group in 2015, the main focus was on dopaminergic and cortical neurons as covered in my earlier blogs and SOPs as our main disease focus was Parkinson’s disease. But it was Dr. Stefano Stefani who convinced me to work with him in exploring the next frontier for the group, and to start making motor neurons from iPSCs. With these neurons, we could now ask ALS-related questions and it opened up an entirely new area of research. Up until then, I was familiar with ALS, but had not been actively engaged in this disease area, so it was nerve-wracking starting as an outsider. But over the past 3 years, this has been a great decision to work with these neurons, giving me the opportunity to meet some of the best and most friendly people working on ALS across Canada. We have been able to develop projects and connections with many groups that wouldn’t have been possible before we started making motor neurons. I was also fortunate to attend the ALS Canada forum, where I got to meet and talk with many ALS patients and families, and the whole experience was truly inspiring.

In terms of making motor neurons, we now do it routinely within the group, and based our SOP off previously published work from another group. I am not going to get too much into the details, as if you read the other blogs and SOPs on making dopaminergic and cortical neurons we take a similar approach, albeit using a different combination of factors to direct the iPSCs into motor neurons. We generate motor neuron progenitors within 18 days that can be expanded and banked. Images of these progenitors at 18 days is shown below 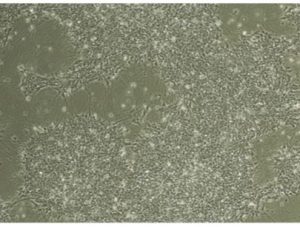 From these MNPs, we can seed them and direct them into motor neurons, that can be maintained for several weeks on a dish. 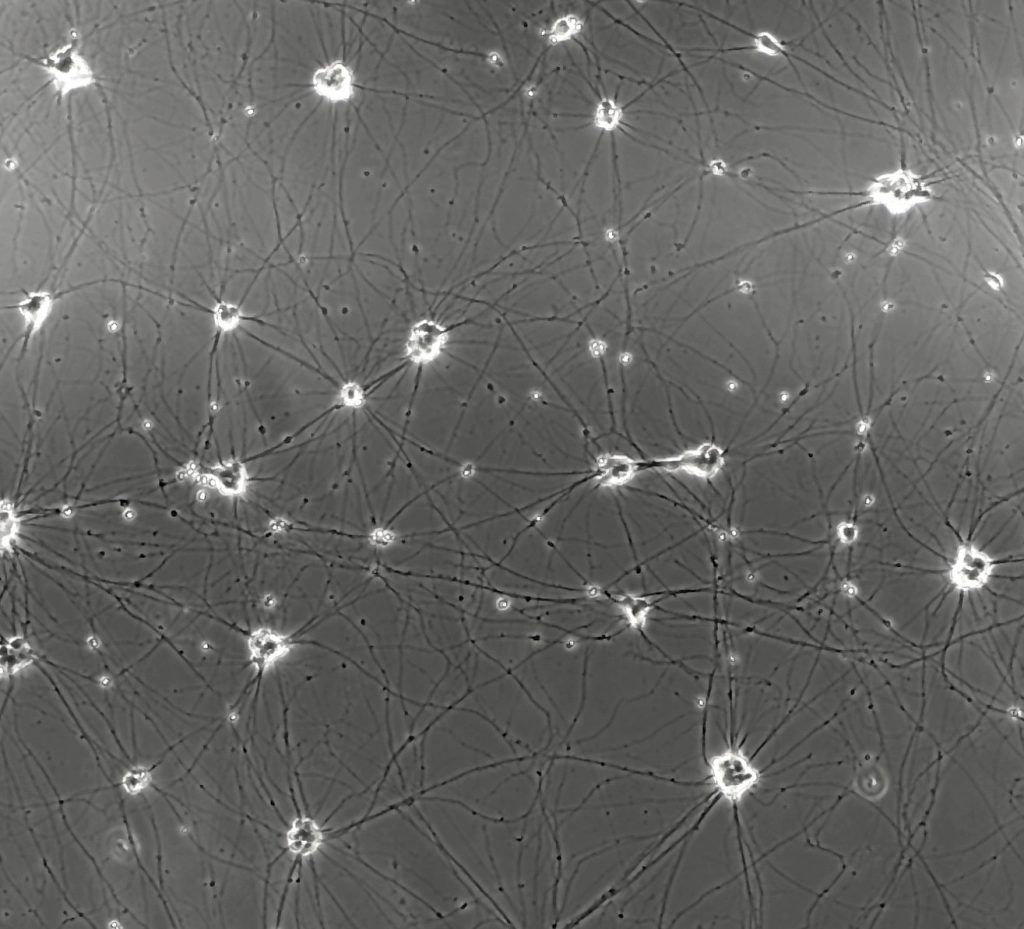 These neurons show firing activity within 3 weeks and possess many of the classical motor neuron markers, as determined by microscopy (Hb9 staining below is one example). With these neurons, we can now study ALS-associated genes and mutations within these cells to model ALS on a dish in different assays.

Besides modelling ALS in a dish, working on motor neurons also opened up the doors to other opportunities, including the ALS reproducible Antibody Platform (ALS-RAP), led by Dr. Opher Gileadi. As one of the co-PIs on this alongside Susanne Graslund and Peter McPherson, we have generated multiple CRISPR knockout lines to ALS-related genes. With these lines, Peter’s group has developed a pipeline to validate commercial antibodies to determine which antibodies are specific to a given protein. This work is available to read online, and I encourage everyone to read it. Too often antibodies are sold by companies that are non-specific for their given target, so we need to take great efforts to make sure what we work with, is truly a specific antibody. More work and findings from this project will be coming online in the Fall, so keep an eye open for more updates.

Motor neurons opened up a new frontier for me and my research, bringing me into the ALS field, much like my leaving certificate brought me to science. I know I have several frontiers still left to explore, and I look forward to seeing where I go next, much like all the students who received their grades today. I look forward to bringing you my next entry next week, in which I switch gears entirely from stem cells and explain how we make and purify a Parkinson’s disease associated protein, so stay tuned for more.