Let me first explain what a FLAG-tag is. FLAG is a short protein that is often attached to the end of an artificially expressed protein to ‘tag’ it and differentiate it from endogenous protein. It only consists of 8 amino acids, with sequence DYKDDDDK, where D is aspartic acid, Y is tyrosine and K is lysine. As it is so short, it is unlikely that it will affect the normal function of the protein that it is tagged to. It is used for a variety of purposes such as for cellular localisation, protein purification, immunoprecipitation etc. It is especially useful when you do not have a good antibody against the protein-of-interest. Attaching a FLAG-tag allows you to use a FLAG antibody instead, which generally works quite well.

The HTT protein that I used has a FLAG-tag on the C-terminal end. Although FLAG usually does not interfere with the normal functions of the protein, it can sometimes be subject to post-translational modifications such as cleavage of the tag from the protein, or it might not be detectable due to the way the protein it is tagged to is folded. 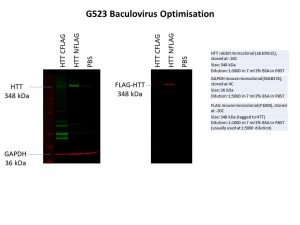 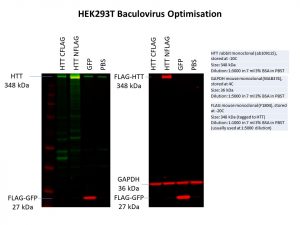 I was only able to detect the N-terminal FLAG-tag and not the C-terminal FLAG-tag in the same cell line as used previously. To be sure, I also repeated this experiment in a second cell line and obtained the same results. A FLAG-tagged green fluorescence protein (GFP) control was also used in my second experiment. Having a GFP control is useful as cells which are successfully able to express GFP can be detected under a fluorescence microscope, allowing me to determine if the protein has been successfully expressed in the cells without needing to do the Western. It would be great if we could express a GFP-tagged HTT using baculovirus, but this is not a trivial feat as HTT is such a large protein.

It seems like an N-terminal FLAG is better in the case of HTT for protein overexpression. However, this is not always the case for every protein. In fact, an N-terminal FLAG has a higher chance of interfering with the normal localisation of a protein as this is usually where targeting signals that direct the protein to the correct compartments of the cell are found. We will need to keep this in mind as we move forward with further experiments using the N-terminal FLAG-tagged HTT.