Recently, a study of cancer-focused protein-protein interactions identified a direct interaction between NSD3 and the oncoprotein Myc in the non-small cell lung cancer cell line H1299 (Li, Z et al. 2017).  Importantly, the study found that increased NSD3 expression levels can activate Myc in H1299 cells as measured by an E-box luciferase reporter. However, the functional significance of this activity in the context of lung cancer remains unclear.

To study NSD3 in this context, as well as other cell types, I have been optimizing lentiviral vectors to express a tagged NSD3short transgene. Initially, I had limited success producing viral particles capable of integrating a bicistronic expression cassette containing NSD3short and a puromycin resistance marker separated by an internal ribosome entry site (IRES). I hypothesized that this may be due to packaging constraints of the lentiviral system and opted to decrease the size of my construct by replacing the IRES element with a sequence encoding a T2A self-cleaving peptide (details of mutagenesis can be found here – Zenodo – Exp016). The 2A self-cleaving system has the added benefit of equimolar expression, while the IRES sequence tends to favour expression of the first coding sequence at approximately 3:1 (Goedhart et al. 2011). For a helpful overview of this topic, I suggest checking out an excellent blog post on the subject over at addgene. This modification to the initial construct improved production of functional virus, as I was able to select for stable integration and expression of NSD3short in multiple cells lines (full experimental details can be found here – Zenodo – Exp018). Interestingly, overexpression of either NSD3short or a PWWP1 mutant (W284A) deficient in H3K36me2 binding resulted in altered morphological features in H1299 cells (Figure1). In cells overexpressing NSD3short, I observed greater eccentricities in their appearance with some cells displaying long projections. This may be indicative of an epithelial-mesenchymal transition (EMT), which would be in line with elevated Myc activity (Cho, KB et al. 2010). EMT is a developmental switch that can promote invasion and migration of cancer cells, phenotypes associated with metastasis.  However, before we can make any claim with respect to NSD3’s involvement in this process, I will have to follow up these observations by assaying hallmarks of EMT, like downregulation of E-cadherin, with multiple biological replicates. 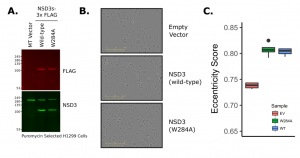