I chose to use the alkaline phosphatase (ALP) protein as an indication of how much BMP signalling has happened in the cell, because ALP’s production within the cell is activated by BMP signalling, and because this is a tried and tested method. In fact, I got instructions for how to carry out the test for another PhD student in the building (thank-you Chao!) At the end of the experiment all I’ll need to do is break open the cells (lyse them) and add 4-methylumbelliferyl (4-MUP) which ALP converts into a fluorescent product that I can easily measure.

Of course, as you may have noticed, setting up a new assay takes a little prior work to check exactly how it should be done. So, in this experiment I have tested how much ligand (BMP-7, which activates the signalling cascade) I’ll need to add in order to see a measurable response. I seeded enough cells to grow happily for the length of the experiment (only 110!), and then 3 days before the end I added different concentrations of BMP-7 to each well. (You can read the complete method here.) This is the graph I got out at the end: 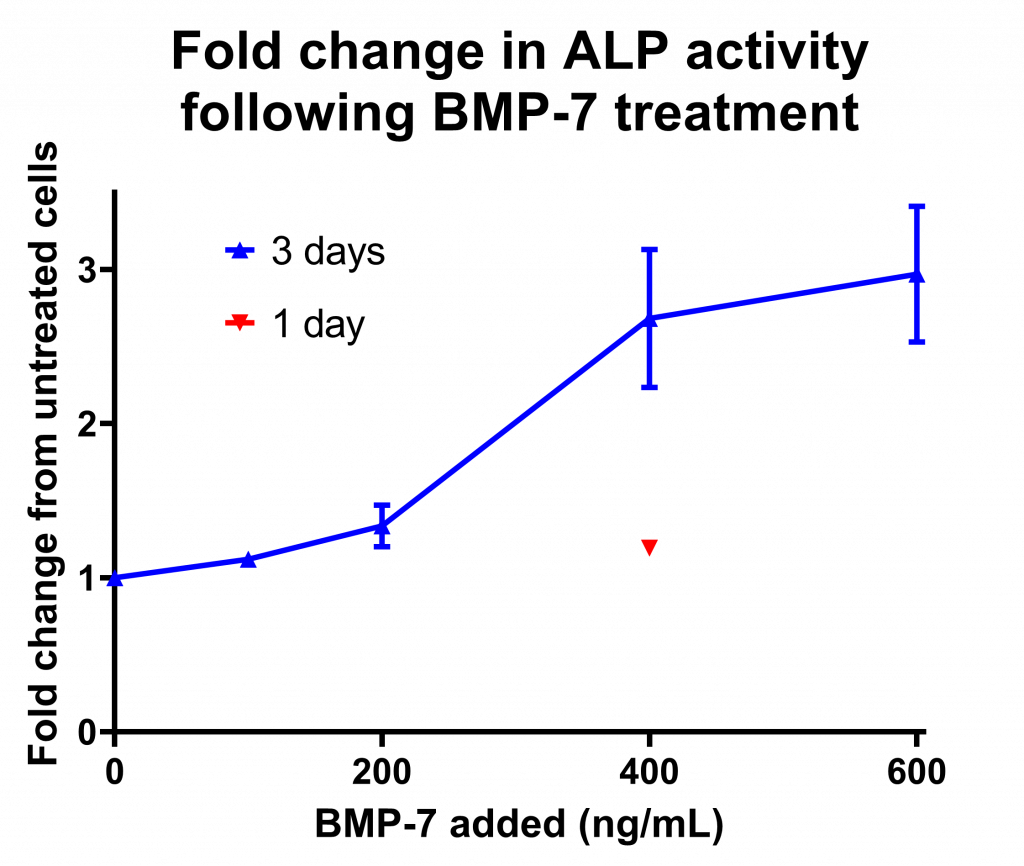 The fold change in alkaline phosphatase (ALP) activity (measured as fluorescence following 4-MUP addition) after 3 days of growth in the presence of BMP-7.

As you can see, adding more ligand increases the amount of ALP produced (no surprise there), but it doesn’t really improve above 400ng/mL so I may not go higher than that. The amount of ALP produced when I added the ligand only 1 day before the end was far less, so I don’t think I can use that time point (I wanted to test it out because I think that the longer the cells are treated with a compound before having the ligand added the bigger difference on BMP signalling it would have). Actually, as a 3 fold increase is quite small and 400ng/mL is quite a lot of BMP-7, I may go on to test adding BMP-7 to the cells even earlier.

What do you think?