In my last blog post, I described how I am trying to overexpress HTT in neuronal cells. While the BacMAM system was easy to implement in cells such as HEK293, it proved far more challenging to express in SH-SH5Y neuronal cells. Since then, I have attempted to use the BacMAM system in two other neuronal cell lines, Neuro-2a and N38. However, I found that even the positive control GFP-BacMAM was low expressing and thus the lines were not very promising for HTT expression (data not shown). These results were disheartening so I began exploring alternative means of expressing HTT in cells, including protein transfection and protein electroporation. The methods described in this post can be found on Zenodo.

I tested protein transfection using HEPES as a DIY protein transfection reagent following protocols from PMC6357789. Jacob McAuley purified some GFP protein for me to use as a test protein. HTT is a far larger protein so I rationalized that if the method did not even work for GFP, it was unlikely to work with HTT which was both larger and cannot be concentrated to the same high level as GFP. The HEPES transfection did not work in HEK293, Neuro-2a, N38 and SH-SH5Y cells, with no discernible amount of GFP detected on a fluorescent microscope in all four cell lines (data not shown).

Electroporation has also been reported to successfully deliver proteins into cells. Using the methods from PMC6656429, and conditions from the manufacturer, I began with electroporating some HEK293 cells with GFP protein to identify conditions where I got the highest level of protein electroporation and sufficiently high viability post-electroporation. I was able to successful electroporate in the GFP protein (Figure 1). I noted that the protein electroporation is most successful with higher levels of protein concentration and with post-electroporation treatment of cells with trypsin. Alas, when I tried this method with HTT, I was not able to get measurable HTT signal by Western blot (Figure 2). This is likely because HTT is a protein that is difficult to concentrated to levels higher than 4mg/ml. While the method did not work for this specific application, it does offer a useful approach to introduce difficult to express proteins into cells and examine how they behave within cells. Antibodies can also be introduced into cells in this manner, as well as sgRNAs/cas9 protein for cell engineering. 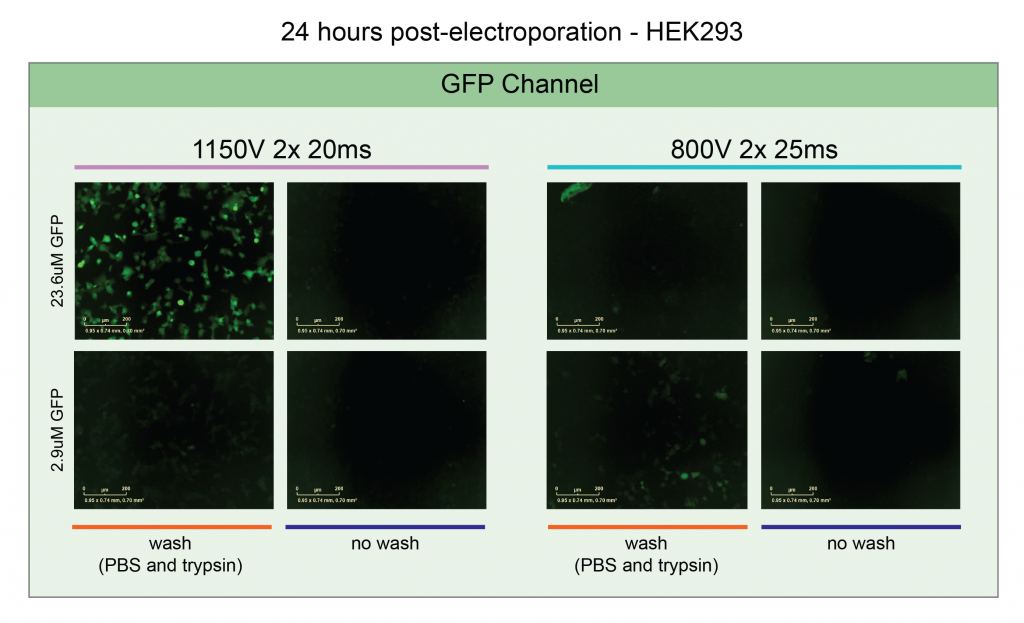 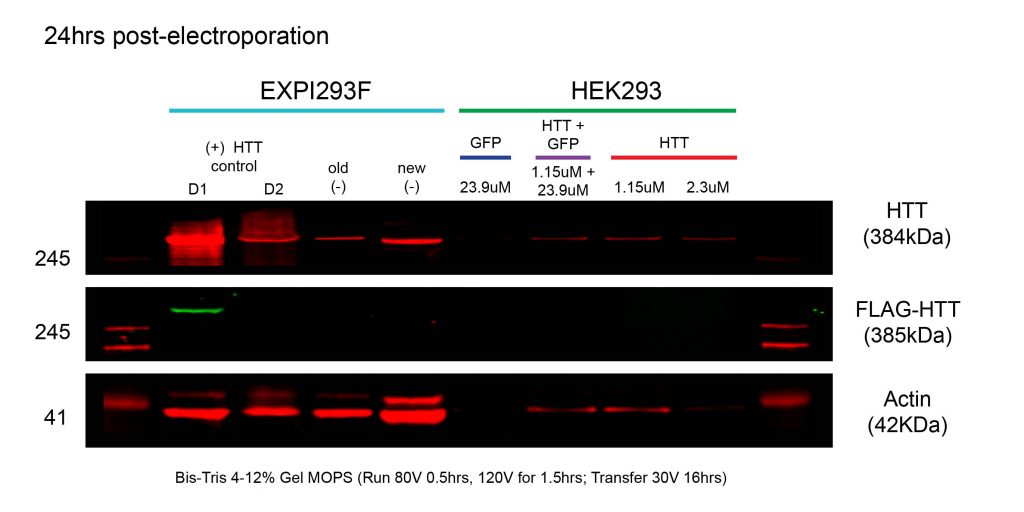 In the end, I decided to go back to the BacMAM system in SH-SY5Y cells and spend some time tweaking the cell culture media and timing of the transduction to improve BacMAM HTT expression. In my last post, I observed that SH-SHY5 cells began dying 2 days post-transduction and that more cells died in higher v/v BacMAM virus. Some possible causes included the SH-SY5Y cells may be dying from either too much virus, the side effects of overexpressing HTT, or incompatibility with the Sf9 media the BacMAM virus is in. I noted that with greater v/v BacMAM virus, the SH-SY5Y cell media was acidifying more quickly, and I hypothesized that this may be because the sf9 media is incompatible with the cells. I scoured the internet looking for advice on what SH-SY5Y media modifications I can make to improve cell growth. Most publications refer to standard growth media conditions identical to my own, but after investigation into the exact formulation of some medias used, I noticed that some contained higher levels of sodium bicarbonate, which is used as part of the CO2 buffering system.

Using modified SH-SY5Y media with a higher percentage of FBS (15%) and supplemented with B27, non-essential amino acids and additional sodium bicarbonate, I was able to successfully express HTT in SH-SY5Y cells (Figure 3). Overall, I observe that there is a trade-off between increased HTT expression and cell death with higher v/v BacMAM virus levels or longer transduction times. Moving forward, I will need to optimize these parameters to get the highest HTT expression with lowest SH-SY5Y cell death. I also want to attempt to express other HTT mutant forms with varying number of CAG repeats.