One of the questions to be asked when looking at the mutation in ALK2 that causes FOP, is how exactly does that mutation cause the disease. ALK2 we know is part of the BMP signalling pathway responsible for bone formation and the mutation results in excess bone formation – thus we can summarise that somehow the mutation leads to increased signal. The question is how?

Alk2 is known to phosphorylate SMADs 1, 5 and 8 (summarised as SMAD1/5/8) in order to signal downstream in the BMP signalling pathway. The instigation of this signal comes from the binding of an external BMP ligand to the domains of Alk2 and a type II receptor on the outside of the cell. This co-locates the internal domains (which incidentally is also where the Alk2 mutation is located) and seems to drive signalling. 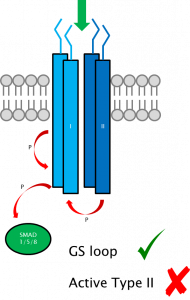 Interaction of the type I and type II receptors in the membrane.

So what don’t we know?

This experiment can be performed using isolated purified proteins. I’ve been busy purifying Alk2 (wild type and two mutant versions – Q207E and R206H), ACVR2 and BMPR2. I’m now ready to combine these with samples of the Kinase Dead version of BMPR2 and SMAD1 that I have in the freezer into a mass spec based assay.

I mixed all the components together at appropriate concentrations, in this case all proteins were at 40uM, ATP was at 0.5mM, Magnesium ions were at 5mM, Manganese ions were at 2mM and DTT (a reducing agent to stop the proteins precipitating) was at 5mM. These concentrations are needed because if you drop lower, you lose the association between the type I and II receptors. In the cell they’d be brought together in the membrane by a ligand binding outside the cell which would co-locate the inner domains. Since we’re only looking at the inner domains in vitro, we need to artificially increase the concentrations to allow them to interact. 40uM was previously determined as being the lowest concentration at which this interaction can reliably be measured. 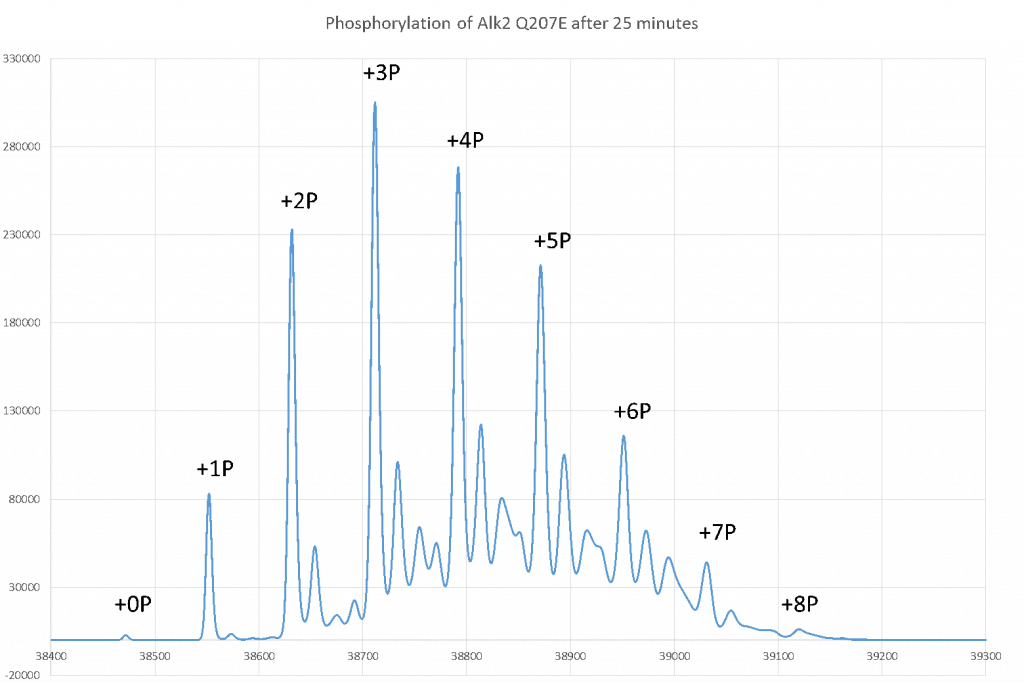 Total phosphorylation of Q207E after 25 minutes incubation with ACVR2.

I used the following combination of proteins in my reaction mixes:

This gave me the following results: In each case the important bit to look at is the initial slope of the reaction, not the absolute magnitude as that is more subject to Mass Spec variance.

Interpreting this data is quite tricky because you can look at phosphorylation on either protein while at the same time comparing the effects of the Alk2 mutations or you can compare the effects of the different type II receptors. I haven’t got enough data to be able to get any quantitative data on initial rates of reaction but the trends shown in this experiment match the trends seen in the previous experiment I ran of this type some time ago (before I started writing this blog).

So, what can we conclude from this experiment?

Next step: Try and repeat it again, however for that I need more wild type protein and we still don’t have the expression system back up and running for that.