A major therapeutic avenue for chordoma is targeting the receptor tyrosine kinase, EGFR. Its ligand, EGF, is overexpressed as a transcriptional target of Brachyury and polysomy of EGFR’s region of chromosome 7 is frequent in chordoma. To this extent I, in collaboration with SGC-UNC’s post-doc Chris Asquith, am working on the profiling of a number of EGFR inhibitors. Of particular interest, though, is this: many commercial EGFR inhibitors also hit another kinase – GAK (cyclin-G associated kinase). GAK plays a major role in prostate cancer, but its role in chordoma is unknown. Based on gene expression data from the Chordoma Foundation, we do know GAK is expressed in most chordoma cell lines.

First, we screened a set of published EGFR inhibitors, some of which also have GAK affinity, on the chordoma cell lines U-CH1 and U-CH2 (Table 1). Most of these compounds have strong potency (<1 μM) on U-CH1 but not as strong of potency on U-CH2; this is expected, as previous work indicates U-CH2 is more resistant to EGFR inhibitors1. Following this initial screen, Chris has developed and I am characterizing a new set of compounds. This is a useful set because some of them have high affinity for EGFR, some have high affinity for GAK, and others show relatively equal affinity for both kinases. Using these compounds will allow us to interrogate if GAK plays a role in chordoma.

I performed a series of experiments to assess how much of each compound was required to kill (or at least stop the growth of) chordoma cells (U-CH1 and U-CH2) as well as normal skin fibroblasts (WS1). An ideal therapeutic would have a high potency for U-CH1 and U-CH2 without being toxic for WS1. A number of compounds have low values in U-CH1 but, like the published compounds in referenced above, do not show activity in U-CH2. A few compounds show activity in both U-CH1 and U-CH2, but they tend to also show similar potency in WS1. The mechanisms of these compounds warrant further investigation, as they will continue to help us understand potential interplay between EGFR and GAK, but their toxicity in normal skin cells may indicate they aren’t great therapeutic candidates. 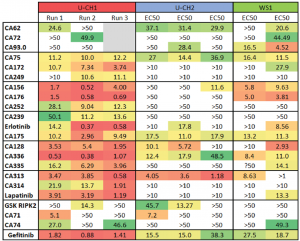 Going forward, I am now trying to work out the mechanism of action of a subset of these compounds: do they kill the cells or just stop their growth? Does specific genetic knockdown of GAK produce similar phenotypes? These data will help us understand if GAK has a role in chordoma and how we can therapeutically target this kinase.

You can read greater detail about these experiments, their methodology, and see more data on Zenodo.