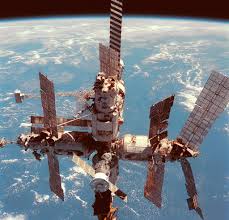 The enzyme PNGase F comes from a bacterium first isolated on the MIR space station.

Nature has evolved molecules called glycoproteins that are proteins carrying sugar chains (“glycans”). Glycans can make proteins more soluble, they can shield them from the environment, they can be used as calling cards to enable protein-protein recognition; in Eukaryotes, a glucose-on/glucose-off quality control system uses glycans to monitor glycoproteins folding.

In general, glycans contribute to expanding the repertoire of protein shapes and sizes that genomes code for, and sugars on proteins are a great asset to nature. Protein chemists on the other hand are not always happy with the glycans on the proteins they produce. This is especially true of molecular biologists forcing cells to synthesise custom glycoproteins: these ‘recombinant glycoproteins’ may end up with glycans that differ from naturally occurring ones.

As it turns out, the ability of stripping sugars from glycoproteins has helped a number of species to survive, and enzymes that can cleave glycans from glycoproteins (“deglycosylases”) are encoded in many a genome. By offering such enzymes, nature comes therefore to the succour of molecular biologists and protein chemists who are unhappy with the glycans on the proteins they handle: by treating a glycoprotein with a deglycosylase, it is possible to get rid of the sugars and obtain a sugar-free protein.

In our case, crystals of a glycoprotein we are studying grew a flimsy lattice formed by glycan-glycan contacts, making the resulting glycoprotein structure all fuzzy. We are hoping that one way of improving on these crystals and obtaining a better structure would be to strip the glycoprotein of the glycans altogether, perhaps enabling the growth of different crystals, kept together by more stable, less mobile protein-protein contacts.

For this reason, we decided to treat our glycoprotein with a special deglycosylase called PNGase F. The enzyme belongs to a rare bacterium called Elizabethkingia miricola, first isolated from condensation water in the Space Station Mir. But a small vial of the enzyme can cost up to £1000 when purchased from commercial sources! We therefore endeavoured to produce our own PNGase F, using E.coli bacteria transformed with the Elizabethkingia miricola PNGase F gene.

After ten days of work, we obtained our stripper from outer space, and were able to confirm its activity. Watch this less-than-outer space for the next experiments in which we shall try and grow our crystals again, this time with the protein without glycans!

One Reply to “Strippers from outer space: recombinant PNGase F.”