This is the first time I am going to share with you my research and I will start with the project I am currently working on, which is the development of cellular HDAC11 target engagement assay. HDAC11, the only member of class IV HDAC subfamily, was believed to be responsible for the deacetylation of lysine residues on the N-terminal part of the core histones (H2A, H2B, H3 and H4). However, recent in vitro data indicates that HDAC11 is 10,000 times more efficient in lysine defatty-acylation than deacetylation (Fig1). 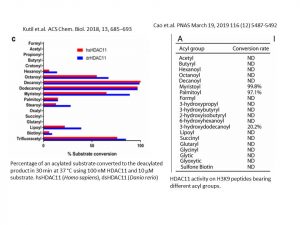 Target engagement assays allow us to test if potential  inhibitors enter the cell and interact with a target protein. Here, we are interested in developing this type of assay for HDAC11. Recently, novel potent and cell active HDAC11 inhibitors have been developed, which can be used for cellular assay validation (FT895 and compound 14). (PMID: 29776742). The activity of inhibitors in cells were tested using NanoBRET™ Target Engagement  Assay, which measured the apparent affinity of test compounds by competitive displacement of proprietary compound labeled with a fluorescent tracer reversibly bound to  HDAC11 fused to Nanoluc luciferase. Currently we are in a process of development of our own fluorescent tracer based on published HDAC11 inhibitors and hopefully we will be able to use it for HDAC11 cellular assay development. However, since the tracer is not currently available I had to try other methods. One generic method for confirming target engagement is Cellular Thermal Stability Assays (CETSA) in which binding of the inhibitor increases the thermal stability of the target protein. I tested thermal stability of HDAC11 upon binding to published HDAC11 inhibitors using NanoLuc technology (PMID: 29937980). In the assay you are transfecting cells with protein fused to Nanloluc luciferease, treat with inhibitors and measure bioluminescent signal after heat denaturation. Compound binding to the protein should lead to protein stabilization compared to controls. The system can be used in cells, which are not permeabilized and permeabilized with digitonin as a control (Fig2). 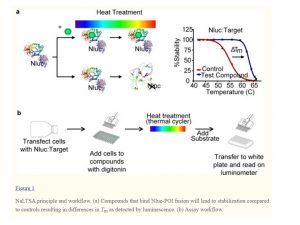 In this experiment, I did not observe thermal stabilization of HDAC11-NanoLuc upon compounds FT895 (202) and 14 (201) treatment (Fig3). Experimental assay details are posted on Zenodo. 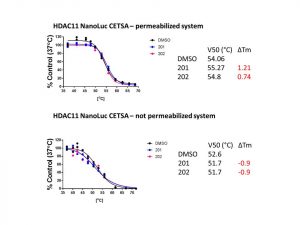 Next I am going to test if I can detect any changes in histones acetylation upon HDAC11 overexpression and inhibitors treatment. I will also update you with my effort to develop assay based on two findings: