In a collaboration between SGC-University of North Carolina-Chapel Hill and M4K Pharma, we plan to synthesize 3 different imidazopyridin pyrazines as promiscuous kinase ALK2 inhibitors, compounds 1-3, Scheme 1.

The first step will be the synthesis of key intermediate 10, Scheme 2.  The proposed synthesis begins with a nucleophilic aromatic substitution on compound 4 to get nitropyridine 5, then reduction with hydrogen on palladium/carbon to obtain the pyridine-3,4-diamine 6.

On the other hand, aminopyrazine 7 will be saponified to the aminopyrazine sodium salt 8, which will be coupled with  compound 6 using peptide coupling reagent HATU to form bromopyrazine carboxamide 9, followed by heating in presence of acetic acid to yield the cyclized intermediate 5-bromo-3-(1-ethyl-1H-imidazo[4,5-c]pyridin-2-yl)pyrazin-2-amine 10. 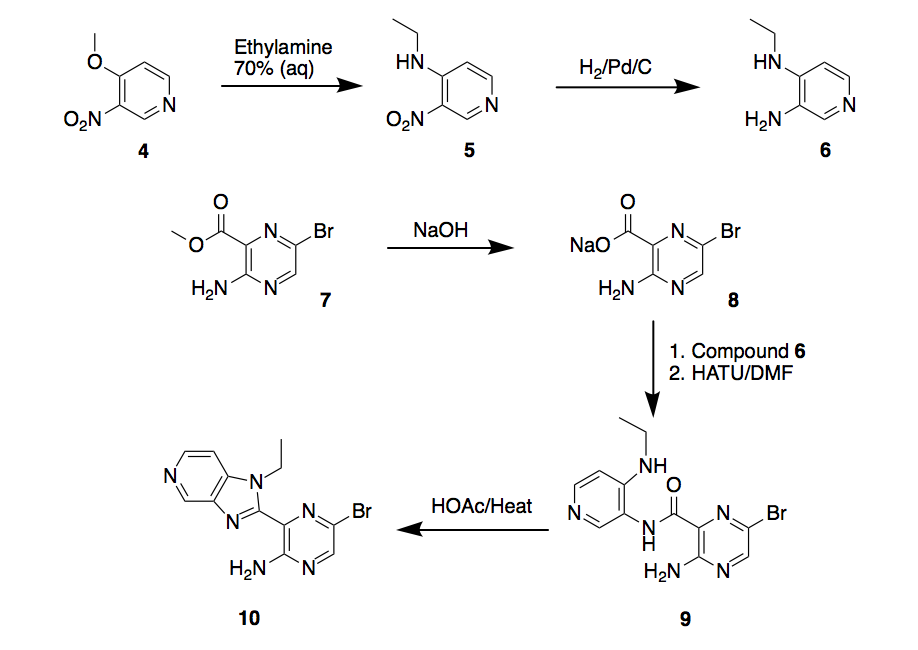 If we succeed with the proposed synthesis of imidazopyridine pyrazine 10, then soon we will present next steps to get to target compounds 1-3

This collaboration is the under supervision of Dr. David Drewry.