In a previous post, I described using hit expansion tools such as commercial substructure searches, docking, and free energy perturbation (FEP) simulations to explore the structure activity relationship (SAR) of the chemical series focused on the Zf-UBD of USP5. The first batch of commercially ordered compounds arrived just before the Christmas holidays. I decided to tackle testing the chemical analogues in the New Year. I used a surface plasmon resonance (SPR) assay to determine binding affinities of commercially ordered analogues, designed from compounds hits listed in Table 1. You can see details on Zenodo.

Table 1. Compound Hits from which chemical analogues were designed 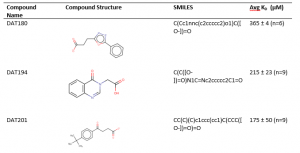 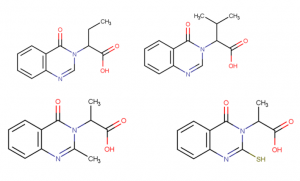 Analogues of DAT180 and DAT201 that were tested did not show a significant improvement in potency. So far, I’ve tested 19 of the 39 analogue compounds of DAT180, DAT194 and DAT201 that were selected in the hit expansion. Some compounds required custom synthesis and were not ordered, and others are still in transit. I will be testing the rest of the analogues once the next batch of compounds arrive, as well as testing follow up compounds of AE-641/11456811. I’ll also be setting up co-crystal trays of USP5 Zf-UBD and AE-641/11456811 for structure determination. Stay tuned!