The early stages of a project often involve spending considerable time building tools to effectively tackle the problem. In cell biology, this often includes testing antibodies and expression constructs in your cell lines of interest. Putting in the work to properly validate these reagents early on in a study is critical. Poorly validated antibodies are, at least partially, to blame for poor reproducibility in life sciences. Recently, I tested two additional commercial antibodies to NSD3, which displayed quite a bit of cross-reactivity in western blotting (full experimental details are up on zenodo – exp012). To date, the AbCam (a180500) antibody seems to perform best in my hands.

To express 3xFLAG tagged NSD3 short in different cell backgrounds, I have been working with a lentivirus expression system. Recently, I have made a W284A mutant NSD3-short expression plasmid to test PWWP1-dependent phenotypes (see zenodo – exp 013). NSD3’s PWWP1 domain recognizes and binds H3K36me2 methylated histones, and it is still unclear how this module contributes to NSD3’s role in oncogenesis. Also, I have tested lentivirus generated from the RRL-NSD3short-IRES-Puro plasmid, in H1299 cells, a lung cancer model. Unfortunately, this construct did not generate infectious particles relative to empty-vector or GFP positive control (see zenodo – exp014). I believe this may be due to the inherent packaging limits of the virus I am using ~10 000kb. My current expression vector exceeds this by about 500 bp, which may be inhibiting viral production. I should be able to reduce the size under this threshold by swapping out the IRES bicistronic element and replacing it with a P2A self-cleaving peptide. 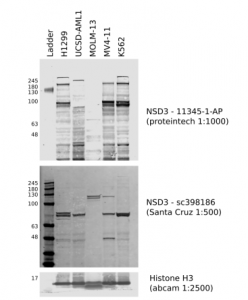