Before I get into the details of my project and share my results, I would first like to give a brief background on HTT.

HTT is a protein that is encoded by HTT, the gene, and it stands for huntingtin. This protein is heavily implicated in Huntington’s disease (HD), a disease that leads to movement, cognitive and psychiatric impairment, similar to Parkinson’s and Alzheimer’s. Like these other neurodegenerative diseases, the symptoms of HD are due mostly to the progressive loss of neuronal function and/or structure.

How does mutant HTT lead to HD?

The large number of Q repeats in mutant HTT causes improper folding of the protein and the dysfunction of HTT. This leads to protein aggregation and accumulation in neuronal cells, which may in turn sequester other proteins and prevent them from carrying out their normal function. Ultimately, this leads to cell death. Extensive neuronal cell death causes the symptoms of HD, which include movement, cognitive and psychiatric impairment. Death is often caused by aspiration pneumonia or cardiovascular disease. 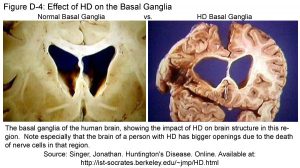 Can anyone get HD?

HD is an autosomal dominant genetic disease. This means that the mutant form of HTT (with an expanded polyQ region) passes from parent to child. Moreover, the child only needs to inherit the mutant HTT from one parent to get HD. As such, if either parent has HD, any child of theirs will have a 50% chance of getting HD. However, there are rare cases in which a person gets HD without either of their parents having HD. Some studies have shown that the number of CAG repeats increases over generations, and it is possible that either parent of such individuals has a ‘borderline’ number of repeats that is larger than normal but not enough to cause HD.

How is HD treated?

There is currently no cure for HD, and treatments are solely to manage the symptoms of HD.

As you can see, HD is a devastating disease. It is hoped that this project will increase our understanding of both the normal and mutant forms of HTT and their roles in the biological function of cells.

4 Replies to “Background on HTT and HD”