As I’ve been having problems overexpression HTT properly in my cancer cell lines, I decided to continue looking at other proteins of interest using our best overexpression model so far, which is in HEK293T cells. Although it may not be a cancer cell line, it is very widely used due to the ease of genetic manipulation, as evident in my success with overexpressing HTT in this line, and would be useful for the elucidation of possible mechanisms of action, which can then be validated in other more relevant but difficult cells.

Huntingtin was also previously reported to be involved in perinuclear localisation and centrosomal organisation. PCNT is a protein that localises to the centrosome and is involved in the formation of the pericentriolar matrix (PCM), which is key for proper centrosome formation and cell cycle progression. Its role in both perinuclear localisation and centrosomal organisation makes it an important candidate to look at in the context of Huntington’s disease. Moreover, it is also involved in ciliogenesis, which has been reported to be disrupted in patients with Huntington’s disease.

Perinuclear localization of huntingtin as a consequence of its binding to microtubules through an interaction with beta-tubulin: relevance to Huntington’s disease

Finally, I also looked at coilin, a major component of cajal bodies. There have been reports that cajal bodies may play a role in the pathogenesis of CAG repeat diseases such as Huntington’s disease. Furthermore, it is a known substrate of PRMT5 and may be affected indirectly by Huntingtin through methylation by PRMT5.

My final list of proteins to look thus consisted of: RMe2s, RMe2a, Lamin B1, PCNT and coilin, with GAPDH as the loading control. 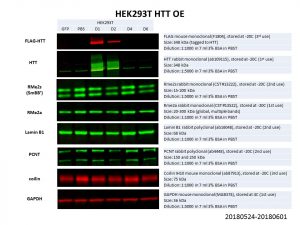 Unfortunately, none of these proteins showed any significant change in protein levels! It is possible that the HTT overexpression was not good enough, especially for the larger constructs of D4 and D6. However, even comparing between the HTT WT overexpression (D1: Q23) and the PBS control, there is no obvious difference in protein levels. Another possibility is that HTT levels is not limiting in the pathways looked at and hence an overexpression does not affect these proteins of interest. It might thus be more prudent to look at knockdowns of HTT instead.