Following the successful synthesis of the furopyridine scaffold via an alternative synthetic route, conditions have been worked out to optimize yields on the synthesis of the key intermediate: 5-bromobenzofuran-3(2H)-one. Thus far the following set of analogs, Figure 1, have been generated by building diversity on the pyridine ring. These analogs together with with proposed others and those earlier on synthesized, would help us to better understand the SAR of this series.

The above compounds have been submitted for testing and data would be provided as they become available. The highlighted analog, BE2-084, was obtained as a result of the unintended hydrolysis of the amide during the final saponification step, Scheme 1. 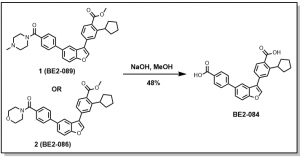 Thus it was envisioned that starting from 5-bromobenzofuran-3-yl trifluoromethanesulfonate, 3, analogs 1 (BE2-089) or 2 (BE2-086), could be achieved via a one-pot synthesis as depicted below, Scheme 2. This route does not require the cyclopentyl acid derivative, 4 [2-cyclopentyl-4-(4,4,5,5-tetramethyl-1,3,2-dioxaborolan-2-yl)benzoic acid] to be protected (methyl ester), and a test reaction conducted indicates that this route is possible and details would be provided in due course.