Following up on my previous post, I tested two antibodies I was planning on trying from Abcam and Novus that were used in previous publications. This time I tested directly in patient sample lysates and either saw no band, or many nonspecific bands (Figure 1). I have since reached out to the Orlando lab who recently published a paper (PMID: 28346433) where they looked at EZH1 expression levels by Western. A post doc in their lab (Peng Liu) informed me that they were also using the EZH1 antibody from Abcam that is no longer available, but recommended that I try a Cell Signaling Technologies antibody. That is what I will be doing next! 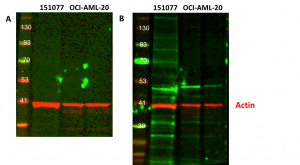 Figure 1: Western blots using actin (red) and EZH1 antibodies from (A) Novus and (B) Abcam (ab176115). An EZH1 band was not detected using Novus (A) and many nonspecific bands were seen with Abcam (B).