PRMT8 is type I protein arginine methyltransferase expressed mainly in the brain, which mono- and asymmetrically dimethylates histone and nonhistone proteins (Fig.1). It shares over 80% of amino acid sequence homology with PRMT1. At the N-terminus, it harbors a glycine that can be myristoylated which results in its plasma membrane localization (PIMID: 16051612).

It has been reported that PRMT8 can methylate pro-oncoprotein encoded by the Ewing sarcoma gene – EWS (PIMID:18698489).  However, in several cell lines, the overexpressed EWS was already methylated even in the absence of exogenous PRMT8 possibly due to high activity of PRMT1. Thus we knocked down PRMT1 and overexpressed PRMT8 wt and catalytically inactive mutant (E185Q) together with EWS to see if in that setting EWS would be methylated by PRMT8. The wild type PRMT8 but not catalytic mutant methylated ectopic EWS (Fig.2). We tested several pan asymmetric dimethylarginine antibodies and the methylation was only detected with Asym25 (Millipore,#09-814) but not with Asym24 (Millipore, #07-414) or Adme-R (CST,#13522). The assay was further validated with PRMT type I selective and PRMT4/6 selective chemical probes, MS023 and MS049, respectively (PIMID: 26598975, 27584694). As expected, only MS023 but not MS049 (negative control) decreased PRMT8 dependent asymmetric dimethylation of exogenous EWS (Fig.3). Although MS023 is very potent in inhibiting PRMT8 in in vitro assays, in cells high concentrations of MS023 are required to see the effect. The Z factor for the assay equals 0.58 (n=3).

Fig.2. The wild type but not catalytic mutant of PRMT8 asymmetrically dimethylated ectopic EWS.  HEK293T cells were transduced with an inducible PRMT1 knockdown vector. After 3 days of doxycycline treatment, PRMT1 levels were drastically reduced (A) and cells were co-transfected with FLAG-tagged PRMT8 wild type or catalytic mutant (E185Q) and GFP-tagged EWS.  The protein expression and levels of methyl mark were analyzed in Western blot. B. Exogenous EWS is asymmetrically dimethylated by overexpressed wild type PRMT8 when PRMT1 is knocked-down. 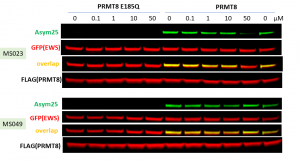 Experimental details are posted on Zenodo.