It’s being a while since I wrote my first post. I have been busy in the lab trying to isolate monomeric and stable samples of the N-HEAT domain just as we demonstrated with the C-HEAT domain (and by Dr. Rachel Harding).

In this post, I summarize the results of the first round of purification of the huntingtin N-HEAT domain with boundaries 81-1643 (HTT N-HEAT_81-1643).

The construct HTT N-HEAT_81-1643 encompasses the entire N – terminal HEAT domain (all 21 HEAT repeats) (Figure 1). This construct and a few others N-HEAT constructs (which I will be posting about later) were selected among several N-HEAT constructs initially made due to high levels of expression in Sf9 cells (Dr. Rachel Harding). The first large scale purification of HTT N-HEAT_81-1643 showed this construct elutes early from the Superdex 200 10/300 column (Dr. Rachel Harding). This implied the construct was either in a high oligomeric state or an extended conformation. 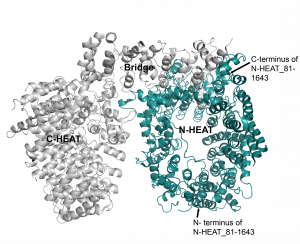 In this purification, I used a different gel filtration column (Superpose 6 10/300) which has a broader fractionation range of MW weights than the Superdex 200 column used initially. By using this column, I could better idea of the particle size of HTT N-HEAT construct. The results from this purification showed the construct also eluted early from the Superose 6 column (MW ~670 KDa- according to protein standards). Note that, if the construct was a monomer and had globular shape, it should a elute at a volume of around 16 – 17 mL (the monomer = 172 KDa). The gel filtration results imply that the construct is in a high oligomeric state likely a tetramer. However, it is still also possible that the construct is in an extended conformation and this would also result in an early elution volume from the gel filtration column (large hydrodynamic ratio). Yet another possible explanation is that HTT N-HEAT_81-1643 is in a complex with nucleic acid material as final A260/280 readings of the purified samples of the HTT N-HEAT_81-1643 show high content of nucleic acid material (A260/280 = 0.7). Future experiments with this HTT N-HEAT_81-1643 will aim at testing these hypotheses. 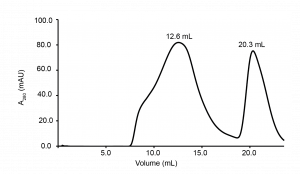 The sample that was obtained from this purification was used to set crystal trays and to test sample stability. To date, no crystals have been observed in any of the trays set for this construct. Regarding the sample stability, the samples are easily degraded at 4 °C in comparison with the C-HEAT domain.