Growing up I have always loved movies, and in particular movie villains. From Darth Vader in “Star Wars”, to the T-Rex in “Jurassic Park”, to the great white shark in “Jaws” and the villainous roundabout in “National Lampoon’s European vacation”, I have always been fascinated by what makes villains do what they do, what is their motive. Why do they do what they do. For a T-rex and a shark, I can assume its because their hungry, for the roundabout its to keep cars moving in a circle, but at the end of the day will we ever really know. Likely not. But my favorite villain of all time, will always be the Joker from “The Dark Knight “(one of my favorite movies too, have seen it now over 10 times if not more). His motive was simple, he wanted to create chaos and carnage, before sitting back and observing the damage that lies in his wake. No rhythm or reason, no plan tucked away in a manila folder (an essential item if you ever are making a plan, I own over 4572 of them, even multi colored ones); just a villain looking to cause problems wherever he goes.

In writing today’s blog, I was reminded of the Joker and movie villains as the topic is  alpha-synuclein and how to make it, a protein that is often viewed as the villain in Parkinson’s disease, causing damage wherever it goes. And here is the Shyamalan movie twist, there is no talk of stem cells today, zip, zilch, nada. Oh Tom, what type of turn have you taken. For today, it will be about good old fashioned protein purification, kicking it “SGC-style”. For those who don’t know about alpha-synuclein, it was the first gene to be linked to Parkinson’s disease (PD) back in the late nineties. It is one of the main components in Lewy bodies (LBs), clumps of protein observed throughout the brains of patients with the disease. But alpha-synuclein isn’t all bad and has a number of positive roles to play in cells, as the quintessential good guy. But there comes a time when something changes, something happens and it goes to the dark side, becoming bad. When this happens, it loses its normal shape, becoming twisted and misfolded. Now it leaves the cell it was in and starts travelling between cells in the brain spreading its message to other synuclein proteins to stop what they are doing, to misfold and join the team. Every time it meets another good guy synuclein protein in neighboring cells, it brings them over to the dark side, leading to more misfolded synuclein with a process that keeps going from here, gradually getting worse, leading to cell death and damage within the brain of affected patients.

In our group at the MNI, we have taken a keen interest in this protein in recent years, and for our work, we have adapted the protocol to express and purify alpha-synuclein in its good native form, before inducing it in a tube to become misfolded, which I will cover next week. In today’s entry, I will only briefly cover how we make it, as all the details can be found in our SOP. For expressing alpha-synuclein, we use a DNA plasmid containing synuclein that is labelled with a GST tag, that makes it easier for us to pull out this protein from the bacteria it is expressed in. When expressed in bacteria (affectionately called BL21 cells), we can observe considerable amounts of this protein when we break the cells apart and run it on a protein gel. IPTG when added switches the plasmid on to express the GST-synuclein. In its absence, no expression occurs. 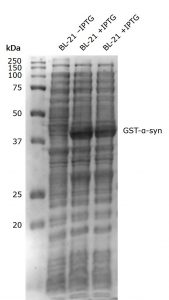 From here, the rest is straightforward, we use beads that bind the GST tag, allowing us to enrich for the GST-tagged alpha-synuclein. Once enriched, we bring our scissors so to speak, which in this case is the 3C protease. The GST is clipped off from GST-alpha-synuclein, and then using our in house Akta chromatography system, led by Dr. Wen Luo, we enrich for the cleaved, non-misfolded form of alpha synuclein that we want from this process, shown below in the gel image. 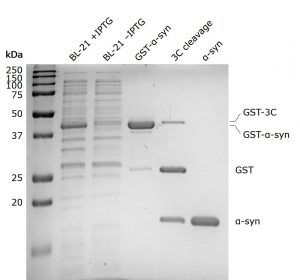 We now readily make milligrams of this protein, and if you ever want some, just let me know and we can reach an agreement. Next time, I will cover the details on how we take this synuclein and cause it to misfold. Hope I put a smile on your face. Enjoy these final days of summer.