In a previous post, I tested hit analogues against USP5 Zf-UBD using a SPR assay. Compound AE-641/11456811, now aptly re-named XSR00035795a (an SGC global ID- since our database infrastructure is finally re-vamped), had a binding affinity of approximately 60 µM. The addition of a methyl group on the carboxylic chain of the compound increased potency 3-fold!

You can find details of this experiment on Zenodo. I crystallized the complex of USP5 Zf-UBD with XSR00035795a, and the structure was solved by Dr. Wolfram Tempel. The addition of the methyl group leads to increased hydrophobic interactions in the binding pocket with W209; the side chain of R221 also rotates out of the pocket (Figure 1).

When co-crystal structures of HDAC6 Zf-UBD and USP5 Zf-UBD are superimposed, binding of XSR00035795a to HDAC6 Zf-UBD makes sense. Figure 3 shows the binding pocket of HDAC6 Zf-UBD is able to accommodate the methyl group of compound XSR00035795a. Replacing a valine residue in the primary pocket of HDAC6 with an alanine in USP5 generates a small cavity that may be exploited by extending the aliphatic group on the carboxylic chain to confer selectivity towards USP5. 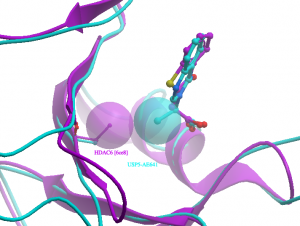 Commercial compounds with extended aliphatic groups on the scaffold have been ordered but unfortunately due to vendor delays, I haven’t received them! Here’s hoping the compounds will arrive soon…

On another note, I will be doing a three month internship at the Montreal biotech, Molecular Forecaster Inc., as part of a NSERC-CREATE ChemNET grant. I will further explore computational chemistry approaches and structure-based drug design to design inhibitors against USP5 Zf-UBD and use the docking platform to dock compounds against available subfamily protein domain structures, as a predictive tool for selectivity. I’ll be heading to Montreal next week! Stay tuned for some neat computational simulations against USP5 Zf-UBD and the results of the extended aliphatic groups on the XSR00035795a scaffold.