A Happy New Year to all! I am back from vacation and ready to jump back into my work with USP5.

Great news- we solved the co-crystal structure of USP5 with a promising compound, UBTR012574a (Figure 1) (discussed in my last post), just before the Christmas holidays. You can check out details about co-crystal growth, and how the structure was solved on Zenodo.

I crystallized the complex of USP5 ZnF-UBD with UBTR012574a, and the structure was solved by Dr. Aiping Dong to a resolution of 1.98 Å. This compound was originally selected by virtual screening. The experimental binding pose turned out to very similar to the predicted/docked one, except for the difluoro phenyl group, which is flipped out of the pocket compared to the predicted docked pose (Figure 2). 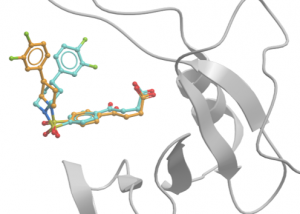 The addition of the extended sulfonamide moiety, outlined in red in Figure 3, increased potency 60-fold from the parent compound (outlined in green in Figure 3). There are some pi-interactions with Y223 in the binding pocket that could explain this increase in potency. The good news is there are several areas of improvement in this compound based on the co-crystal structure. Potential improvements may be to replace the piperidine with an aromatic ring to improve pi-interactions with Y223. Decorating the outer phenyl ring with polar groups may lend to hydrogen bond interactions with D225. 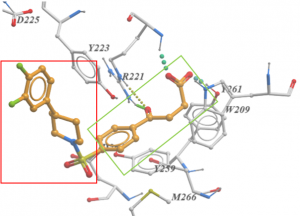 Next, I’ll be looking for commercial analogues of UBTR012574a to get a better understanding of the structure activity relationship of the extended sulfonamide group at the para position of the benzene ring. We also are hoping to have some chemistry resources soon, so I’ll be designing some analogues of interest based on the co-crystal structure of USP5 ZnF-UBD and UBTR012574a.