Well hello there, did you miss me. No, I didn’t get stuck on a roundabout for days, preventing me from writing my next blog. I was simply enjoying the Montreal sunshine and those umbrella-containing beverages. Whoever came up with the idea of an umbrella in a drink is a genius. The umbrella shades the drink, keeping the ice cold, so you can enjoy the cool refreshing taste of your drink for so longer. It’s simply “brilliant“. All drinks should have umbrellas in my opinion, with little dinosaur pictures or little plastic dinosaurs hanging onto the side. Maybe I will make it my next venture, keep an eye out for jurassic umbrellas.

So we are now at the halfway point since I went and wrote an article saying I will give away my SOPs and do 10 blogs over the summer months. I am now at  Blog #5 of 10, so I kept my promise and did what I said I would do. But I am not finished here, I am only getting started, with more SOPs, data and other exciting goodies coming your way in August and beyond.

Now besides umbrellas another reason for my delay was I got hooked on a new UK show. Can you guess what it is from the title? No, its not “Of dopaminergic neurons”, though that is a new documentary I am developing with the hope of bringing it to TIFF in 2021. I mean “Years and Years“. For those not familiar, it follows the Lyons family from Manchester and the series progresses over a 15-year span from 2019 to 2034, tracking how society and our own lives might change with each passing year. It was truly fascinating, and I binged through it in under a week, which is a rare feat for me.

So why do I mention this? Well by looking ahead into the future about what might come, it got me nostalgic and started me thinking about how far things have come with my own stem cell group. Leading me to reminisce for days of yore. When people see our group now, they think we have our stuff together. Which is kind of true, though we do have our own mishaps and disasters from time to time. But, it wasn’t always like that. When we started in 2015, we were an utter gongshow in so many ways, figuring things out on the fly and going day by day. There was me, Carol Chen and Andrea Schreij, with Ted Fon providing us guidance and leadership to keep going. We hadn’t a notion about what we were getting into, we knew stem cells were cool, but the first 6 months were exhausting. Between the three of us we were working 7-day weeks to keep our cells alive and happy. This didn’t even take into account all the effort that went into making neurons from these stem cells. But gradually, with time and perseverance we did it, we made our first dopaminergic neurons, and below is the fluorescence images of these first neurons. This picture is stuck on the door of our cell culture room to remind us of how hard it was (but how much fun it was) during the first year and to remind us how far we have come. Many people doubted us, but we worked hard, got better and now have a healthy respect for the stem cells and all their uses. 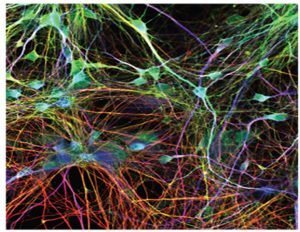 Which is why over my next two blogs, I will be putting out three protocols on how we generate dopaminergic neurons from iPSCs going from the iPSC to the neuron. Yes its tough to make neurons, but its doable and we are here to help  as best we can, starting with the protocols we use, going from an iPSC to cortical neurons, or the Dopaminergic neurons you see below (Adapted from our open access Frontiers review). 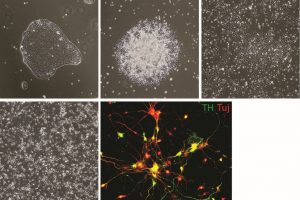 When we make dopaminergic neurons, we always make a large batch of progenitors, so we can use the same batch in a given study as much as possible. These are cells primed to become neurons, but they still divide and proliferate until we give them the media and factors to drive them into neurons. A lot of the details are in the SOP, so I won’t go too much into it. But once you have progenitors, you can easily generate the dopaminergic or cortical neurons needed for your experiments, depending on the type of progenitor you made at the start.

Suffice to say, be careful with your cell density, this is crucial in getting good neuronal cultures, too many cells or too few cells and you won’t get good neurons. So figuring this out for each cell-line is crucial. Neurons grow differently from line to line, which also needs to be accounted for.

Also look out for proliferating cells. Often, when you start neuronal differentiation, you have cells that won’t differentiate, and they remain proliferative. If left unchecked, they can grow out of hand and contaminate your cultures. This is why we use mitomycin C to reduce these cells, leading to more pure cultures, although you will always have other cell types, including astrocytes. Having too pure neurons is also an issue, as having astrocytes and other glial cells can be good for maturing and maintaining your neuronal cultures, so its something to consider.

These neurons can be grown for many weeks in 2D and are a great source of human neurons for modelling diseases of the brain in a dish. But our story doesn’t end here, as 3D neuronal organoids take things one step further. This is something I will explain before the month is over. So, enjoy our two new SOPs, one is our regular pdf for generating neurons from progenitors, and the other is our interactive one to help with training. I hope you enjoy the trip down memory lane with me as you learn a little about our humble beginnings, remember everyone has to start somewhere. On Friday, I will describe how we generate these neuronal progenitors from iPSCs. Until next time, think of me the next time you enjoy a cool umbrella containing drink.