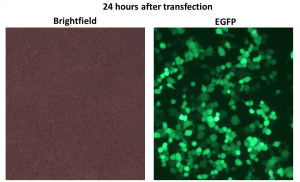 EGFP signal in transfected cells. HEK293 were transfected efficiently. Cells can be harvested for nanoBRET assay.

Good news! The IC50 values determined using low concentrations of Tracer-6908 are good approximation of the actual compound IC50. 65nM Tracer-6908 is chosen for future nanoBRET ACVR1/ALK2 assays because it will be most cost efficient. Even though the maximum signal at this tracer concentration is lower, the standard deviation among experimental replicates remained small, indicating that the quality of the data is not compromised.

For full experimental details, please refer to the Zenodo post.