The etiology of HD is the expansion of Q repeats or CAG repeats in the HTT gene, which produces the huntingtin protein. This causes improper folding of the protein and leads to protein aggregation in neuronal cells, which ultimately causes the movement, cognitive and psychiatric impairment we see in people with HD. You can read more about HTT and HD in my earlier blog post here (https://openlabnotebooks.org/background-on-htt-and-hd/).

Although we know that HD is caused by mutant HTT, no one has yet developed a cure for it. As I am investigating the effects the number of Q repeats in HTT has on the biological function in cells, I will attempt to recapitulate the disease in a cell model by introducing exogenous HTT with different numbers of Q repeats into mammalian cells and studying the phenotype of the cells.

Generally, a normal person would have up to about 35 Q repeats in HTT while people with HD have more 45 Q repeats, with the severity of the disease increasing with the number of Q repeats. Here is a set of graphs I used in my earlier blog post on the background of HTT and HD which you can use to correlate severity of the disease (measured by the age of onset and age at death) with the number of Q repeats in the constructs I am using for my experiment. 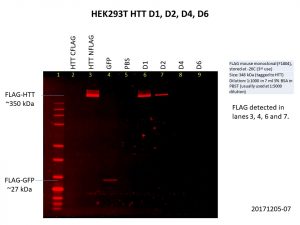 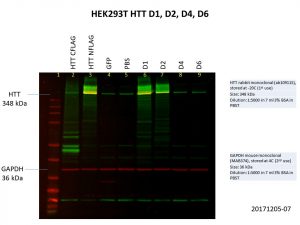 As with the previous image showing FLAG expression, HTT expression in D4 and D6 are comparable to that of the GFP and PBS controls. More optimisation will be needed to further improve the expression of these larger constructs.

5 Replies to “Overexpression of Expanded HTT”